At last sanity prevails in NA 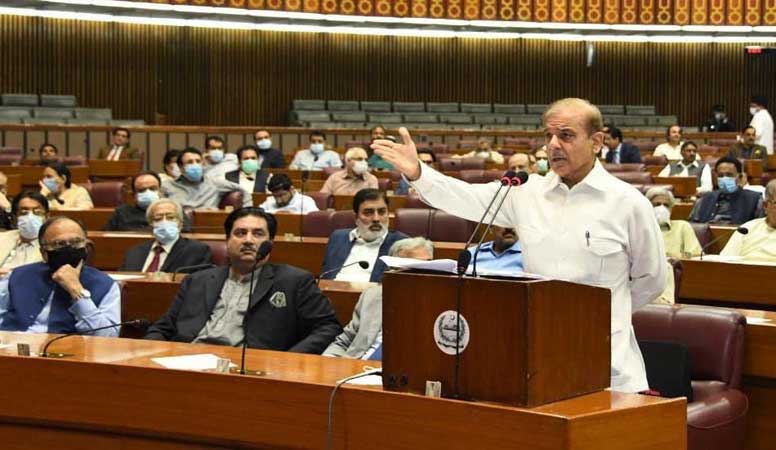 As calm returned to National Assembly after three days of rumpus, Leader of the Opposition in National Assembly Shehbaz Sharif on Thursday lambasted the PTI government for what he called delivering ‘fake budgets’ in last three years.

Shehbaz Sharif was finally able to deliver his budget speech uninterrupted in the Lower House after three consecutive sessions of National Assembly were adjourned due to mayhem caused by both treasury as well as opposition members.

“In the last three years, many taxes were imposed by PTI government because of which the poor man’s meals have been halved. Previous budgets have created hunger and hopelessness in country and the recently announced budget 2021-2022 will further increase inflation and the poor would suffer more,” Shehbaz said in his three-hour-long written speech. He called for reviewing the budget proposals about taxes and duties in order to ensure maximum relief to the masses. He specifically pointed out to rationalize the tax proposals to spur the economy by promoting sugar industry, fertilizer and LNG sectors.

In his speech, the PML-N president maintained that new taxes on prices of essentials should be eliminated; duty on milk powder for children should be reversed; salaries of government employees should be increased by 20%; minimum wage for labourers should be set at Rs 25,000; taxes on LNG and RLNG should be removed and electricity tariffs reduced to rates set during the PML-N’s tenure; DAP fertiliser, urea prices and tariff on tubewells should be reduced to the level in 2018; sales tax on machinery should be ended immediately and work on CPEC projects should be restarted immediately.

“Twenty million people have fallen below the poverty line in last three years. Income has been reduced by 20 per cent. People are asking where are the 10.5m jobs [promised by the PTI]. As a result of these fake budgets, 5m people have lost their jobs,” Shehbaz claimed in his speech. “Whether anyone has imagined that a man would sleep hungry in Riasat-e-Madinah. They say we will create Naya Pakistan. It is obvious that the old Pakistan was better when the country was somehow made to progress,” he quipped.

The PML-N leader pointed out that there was a ‘lack of trust’ among provinces and between the provinces and the federal government, claiming that ‘such differences have never been seen before’. “If only Punjab progresses and the rest of Pakistan does not, then it is not progress,” he emphasised.

Shehbaz said that instead of solving issues such as food inflation, the PTI government has spent the time ‘taking revenge’ from the opposition. He said nobody was saying that accountability should not happen but ‘fairness should be the benchmark’ for it.

The PML-N leader said the per capita debt in Pakistan had risen to 0.14m, adding that “every last hair of our coming generations is mortgaged”. “Can any nation remain alive like this – with an atomic bomb on the one hand and a begging bowl on the other?” he asked.

Shhebaz stressed that the country would have to generate resources, saying “if we want to end dictation, then we will have to break the begging bowl.” He questioned what the government had done to increase exports in the last three years.

He also talked about the efforts the previous PML-N government employed to make Pakistan better and said that it was Nawaz Sharif who eliminated several problems of the country, including terrorism, electricity load shedding, and patwari culture because he had all the provinces on the same page.

Criticising the previous government in the lower house of parliament, Planning Minister Asad Umar has said that the PML-N left the country’s economy in shambles and Pakistan was on verge of becoming a ‘beggar state’. “The PML-N prepared the ground to make the country a beggar [state] … due to the flawed economic policies it destroyed the country’s economy,” Umar said while addressing the NA session.