Electronic voting only option to prevent rigging in elections: PM 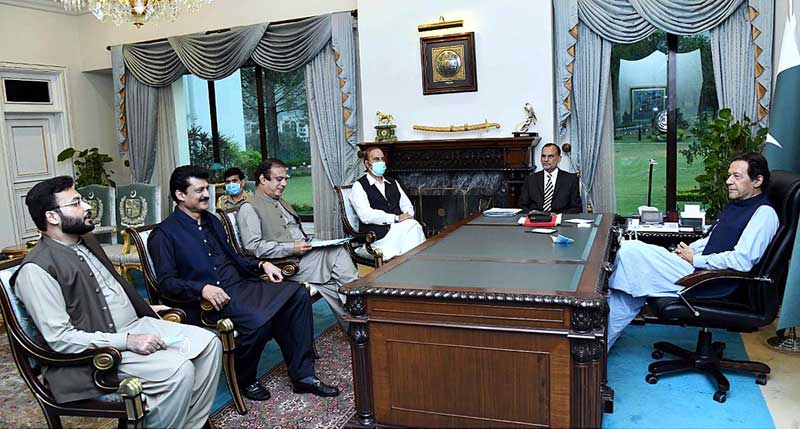 Prime Minister Imran Khan on Thursday directed the authorities concerned to complete the process of electoral reforms and electronic voting system for overseas Pakistanis at the earliest.

Minister for Science and Technology Shibli Faraz, Leader of the House in the Senate Senator Dr Shehzad Wasim, Minister for Railways Azam Khan Swati, Minister of State for Information and Broadcasting Farrukh Habib, and Advisor to the Prime Minister Babar Awan were present during the briefing.

Separately, Prime Minister Imran Khan has directed the authorities concerned to devise a comprehensive strategy on wastewater treatment to ensure supply of clean water to urban population and for agricultural purposes.

Chairing a meeting on the progress on Ravi Urban City and Central Business District projects, he stressed the need for installation of wastewater treatment plants, especially in major cities. The prime minister said in cities like Lahore, the use of modern technology is important to meet the shortage of water for growing population.

The prime minister was informed that the development work at Sapphire Bay would be initiated soon after the finalization of the contract next week. The process regarding approval of industrial zone will be completed by June to be followed by construction of the infrastructure, he added. The educational institutions including Iqra University, University of Management and Technology and ISC will set up their campuses in Ravi City. Also, Iqra University has shown interest in building a hospital besides its campus.

The meeting was also briefed on the transfer of three water plants by Water and Sanitation Authority (WASA) to Ravi City and the use of modern technology for wastewater treatment. The participants were also updated on the directions issued by Environmental Protection Agency by Judicial Water Commission to expedite the approval process of Ravi Urban City project.

It was highlighted that a quota for local populace had been reserved for jobs under the Ravi City project and around 100,000 households would benefit from the opportunity. Also, the locals will get medical treatment on fifty percent concession.

On Central Business District project, it was informed that the auction process would commence in the first week of July 2021. A board has already been established for the Central Business District project which was in consultation with Nespak and Frontier Works Organization (FWO) to finalize a design, with the development work, set to begin next week.

PM for expediting process of cadastral mapping of country

Prime Minister Imran Khan has directed for expediting the process of cadastral mapping of the country. The prime minister issued these directions while chairing a meeting of the National Coordination Committee for Housing, Construction and Development in Islamabad on Thursday.

The prime minister said the construction sector is playing a vital role in the country’s development and economic growth. He urged all federal departments concerned and provincial governments to resolve the problems of investors immediately.

The chairman Capital Development Authority (CDA) informed the meeting that CDA’s online portal has been launched and it will be further improved. In addition, a one-window facilitation centre is also being set up which will provide land transfer, fee payment and guidance facilities for the citizens.

He said that revenue records of rural areas of Islamabad are being computerized for which a Land Record Management Information System has been set up.

The Surveyor General of Pakistan informed that Mapping of 53 sectors of Islamabad, 35 percent of Punjab, 56 percent of Khyber Pakhtunkhwa and 30 percent of Balochistan has been completed. This process will help eliminate illegal occupations, increase tax collections.