Chaos as govt, opp MPs ‘come to blows’ in NA 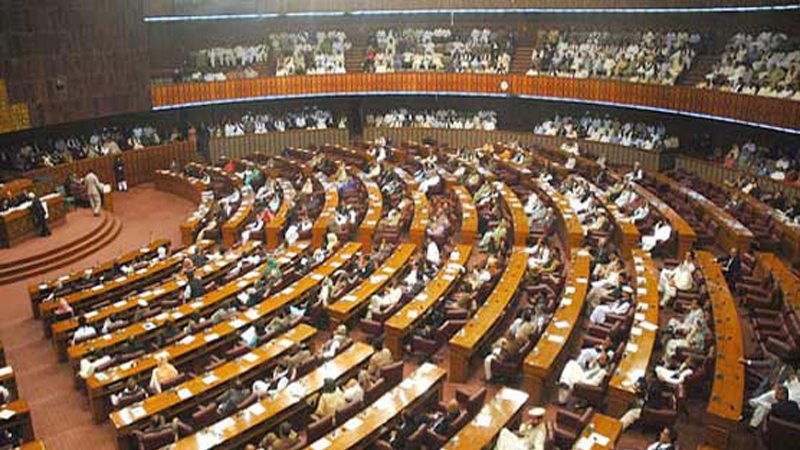 The Lower House descended into chaos on Tuesday as treasury and opposition lawmakers almost came to blows and hurled objects at each other following loud jeers, slogans and whistles by the ruling party members during the speech of Lead of Opposition in National Assembly Shehbaz Sharif.

Tempers rose and the government and opposition lawmakers came face-to-face as PML-N President Shehbaz Sharif took aim at the government during the general debate on federal budget 2021-22. As PTI MNAs surrounded the former Punjab chief minister, PML-N lawmakers and other opposition members formed a protective circle around him.

Videos widely shared on social media showed PTI’s Ali Nawaz Awan shouting expletives at a member of the opposition and tossing a book at his rival, who hurled it back at him. Later, budget books were seen flying across the National Assembly hall as lawmakers from both sides attempted to hit each other with full force. Ali Nawaz Awan can also be seen in a video clip, responding in kind to abusive language by a PML-N lawmaker. A woman lawmaker tried to pull the PTI MNA away from the group of legislators who were shoving each other. He can be seen in the video, throwing a booklet at the PML-N leader and shouting angrily at him. Federal ministers Shah Mahmood Qureshi and Fawad Chaudhry were also seen standing by their seats. The treasury members, including Foreign Minister Shah Mahmood Qureshi and some other ministers, started thumping the desks and raising slogans of ‘Chor, Chor’ (thief, thief) as soon as Shehbaz began his speech. Another minister, Ali Amin Gandapur, can be seen in another video clip exchanging words with the opposition lawmakers.

Speaker Asad Qaiser announced a break three times to control the commotion but in vain. The tension rose to its peak when PTI lawmaker Faheem Khan approached the opposition leader. He was resisted by some PML-N leaders then there was a rain of budget booklets (put on lawmakers’ desks) in the House. When the speaker failed to control the situation, he deferred the proceedings till today (Wednesday).

Earlier, as soon as the session resumed, the speaker gave floor to the opposition leader for his speech. As he started speaking, he was greeted by loud jeers, slogans and whistles from the treasury members which continued throughout his almost one-and-a-half-hour noisy speech. Shehbaz Sharif had a written speech consisting of many pages but he could not deliver due to a scuffle which erupted between treasury and PML-N lawmakers.

During his speech which was hardly audible from the galleries, Shehbaz questioned, “Imran Khan Niazi promised 10 million jobs. Where are those jobs? Where are the $300 billion that were supposed to be brought back to the country from abroad?” Continuing to lash out at the government, he said that PM Imran Khan’s claims of eliminating corruption from Pakistan are hollow. “Pakistan is suffering from the worst form of corruption today,” he said. “No act of posting or transferring someone these days is done without an element of corruption these days,” he added, and criticized the government’s budget saying that it has failed to provide relief to the masses amid spiralling unemployment and inflation.

Speaker Asad Qaiser kept interjecting, requesting lawmakers on the treasury benches to refrain from shouting while the leader of the opposition spoke. However, no one listened and the opposition leader continued, wearing headphones to drown out the noise.

“They accuse us of generating useless power. If that is the case, why are people suffering from load shedding these days?” asked Shahbaz. “During the government of my brother, former prime minister Nawaz Sharif, Pakistan set up power plants across the country and ended the menace of load shedding. The country was heading towards economic prosperity then, whereas now, everything is on the decline, even the per capita income,” he lamented.

“Today the whole nation saw on their TV screens how the ruling party resorted to hooliganism & even naked abuse. Only goes to show how ethically shallow Imran Khan and his whole party are and how PTI has turned into a fascist and abusive party. Unfortunate!” tweeted Shehbaz Sharif after the session.

PML-N lawmaker Marriyum Aurangzeb attributed the blame for the episode to Prime Minister Imran Khan. “This is the reality of the ‘Naya Pakistan’ Imran Khan has created. This is a reflection of his fascist mindset,” she tweeted. “He will leave no stone unturned to paralyse [the] parliament and weaken democracy. Throwing budget books at the opposition. This is Imran Khan’s ‘Riyaasat-e-Madina’.”

Members of the government, however, held the opposition responsible for the ruckus. Defending his conduct, PTI’s Awan said although his video of swearing had gone viral on social media, it was the opposition members who had crossed the line first. He shared another video showing opposition members shouting anti-government slogans, and wrote, “PML-N members resorted to swearing first and shoved our members; my reaction was a response to their actions. It is important to see both sides of the picture.”