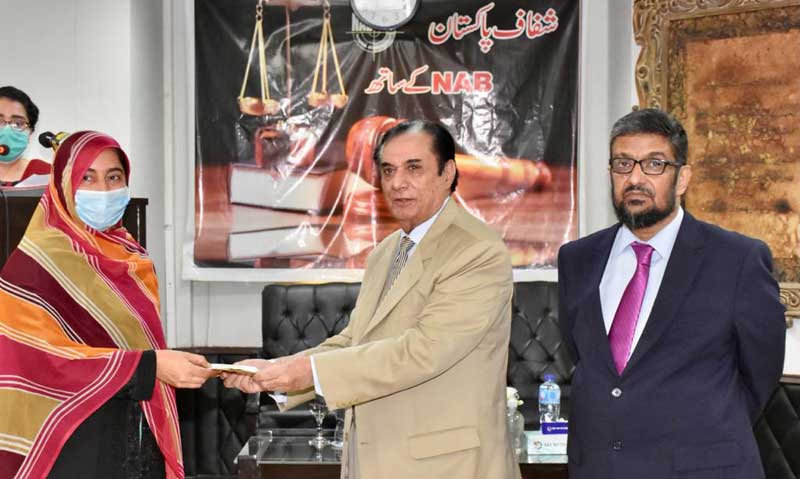 Addressing a ceremony held to distribute cheques worth Rs 900 million among 660 affectees of Toyota Gujranwala Motors scandal at NAB Regional office here, he said that NAB was not an issue, but a solution to the issues.

He said that constructive criticism could help us to learn about various dimensions for taking action against corruption. But there were always two ways of criticism; so if someone could not project a positive image of NAB inspite of its visible excellent performance, he should not depress and deject people of Pakistan by indulging in criticism for the sake of criticism in order to tarnish the image of NAB.

He said that some accused persons, after appearing before the Honourable Courts hearings in various cases, speak against NAB, adding that negative criticism on NAB by some elements could not make any difference as NAB is an independent and lawful Institution which is working to take action against corruption as per law.

Honourable Mr. Justice Javed Iqbal said that in the past, it was alleged that investors and businessmen were not satisfied with NAB and the investment had been affected by the NAB operations, he added. The chairman said that if the investors were afraid of NAB action, there had not been positive trend in the stock markets of Pakistan and construction sector, as well, besides significant increase in economic reserves in the country.

He said that some elements were asking for amending the NAB laws, but they should read existing NAB laws first. He said an ordinance had also been brought earlier to amend the NAB law, which remained imposed for four months and no major decision was made during that period in the presence of the said ordinance which could be presented as an example. However, later that amendment was withdrawn.

Those intending to bring an amendment to the NAB law should read the Supreme Court’s decision pertaining to Asfandyar Wali case, he added.Regarding money laundering, Honourable Mr. Javed Iqbal said that NAB would definitely continue its proceedings if there would be enough evidence including statements of witnesses in the corruption cases.

He said it was a major challenge to recover the looted money from the accused persons, adding that NAB was a people-friendly institution, working to take measures only for checking and curbing corruption and uplift of the country.

He appreciated the excellent performance of NAB Lahore’s combine investigation team and particularly, DG NAB Lahore as owing to their effective efforts, the first installment of cheques worth Rs. 900 million were being handed over to 660 affectees of Toyota Gujranwala Motors within 20 months duration.

DG Lahore Shahzad Saleem told that NAB Lahore, since its establishment, had recovered Rs.110 billion from the corrupt elements. But, during the last four years, under the dynamic leadership of Honourable Mr. Justice Javed Iqbal, it had recovered Rs.73.99 billion, out of which Rs.13.24 billion were recovered through holding Plea Bargain (PB) and Rs. 60.74 billion by indirect recovery.

The last 4 years data shows that NAB Lahore recovery is 713 percent high/ year as compared to early 2017 years before time of the present management of NAB which is increased due to hard work, commitment and dedication of all ranks of NAB Lahore under the supervision of DG NAB Lahore, he added. He said that due to NAB Lahore’s efforts, about Rs. 800 billion have been saved in the IPPs matter, while more savings were expected in the coming days.

Referring to All Pakistan Textile Mills Association (APTMA) patron-in-chief’s statement, the DG NAB Lahore said due to decrease in IPPs payments, the textile industry was provided with electricity on special tariff, which was expected to increase exports by $8 billion till next year.Later, the NAB chairman distributed cheques worth Rs. 900 million among 660 affectees of Toyota Gujranwala Motors. The affectees also appreciated the efforts of NAB, led by its Chairman Mr. Justice Javed Iqbal and DG NAB Lahore for recovering their looted money.