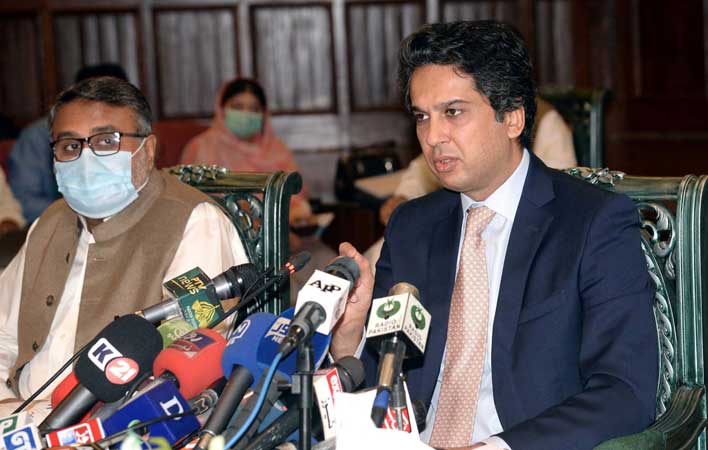 Punjab budget for financial year (FY) 2021-22 is positive and growth-oriented and in accordance with Pakistan Tehreek-e-Insaf (PTI) manifesto.

He said all economic indicators have now improved and the GDP growth rate would remain at 3.9 percent during the next financial year.

Hashim said, “Our four flagship programmes are: (i) Universal Health Insurance (UHI) worth Rs 80 billion and 100 per cent population of Punjab would have UHI cover in the next six months;

“(ii) Insaf up-gradation of schools project under which 8,360 primary schools would be up-graded to elementary level with a cost of Rs 6.5 billion;

“(iii) Rs 360 billion district development programme (DDP), under which uplift projects like restoration of roads, drainage and drinking water, basic health and education, would be started in 36 districts of Punjab. Under this initiative, Rs 99 billion has been allocated in the FY 2021-22; and

Other prominent initiatives under the ADP (Annual Development Programme) of Rs 560 billion included restoration of roads, setting up of mother and child healthcare hospitals, special incentives for economic development, preparation of a workforce, environment and green Pakistan, and public housing schemes, he added.

The provincial finance minister said that development funds of over Rs 100 billion would be released in July, the first month of next FY, so as to ensure early initiation of development projects, and an effective mechanism had also been devised to check the enforcement, expenditures and timelines for these projects.

He said that the government was more focused on social sector, human development and public service than infrastructural and other developmental projects. South Punjab, which had since long been deprived of its due rights and resources, would now be paid greater attention in the ADP. Despite huge economic challenges and repercussions of the corona pandemic, the government managed to increase its ADP by 66 per cent against Rs 337 billion of current FY. Under the development expenditures, he said, Rs 205.5 billion would be spent on social sector (education and health) which is 110 percent higher than current FY; Rs 145.4 billion (87 percent high) on infrastructure development, Rs 91.41 billion (92 per cent high) on special programmes, Rs 57.9 billion (234 percent high) on production sectors of economic growth including industry, agriculture, livestock, tourism, forests etc.

Under its vision of ‘Sara Punjab: Hamara Punjab’ (entire Punjab is ours), the provincial government would spend Rs 360 billion on DDP under which uplift projects like restoration of roads, drainage and drinking water, basic health and education would be started in 36 districts of Punjab. Under this initiative, Rs 99 billion has been allocated for FY 2021-22.

About Lahore, he said, an amount of Rs 28.3 billion had been set aside under which mega infrastructural development projects would be initiated.

The Punjab government had also allocated more than Rs 50 billion for continuation of tax relief/ concession in the next financial year, he said, adding that one per cent duty ratio instead of 5 per cent on stamp paper would be maintained by the Punjab Board of Revenue and the purpose of this concession worth Rs 40 billion was to encourage new investments in construction sector. The Sales Tax (ST) ratio on more than 25 services would continue at 5 percent instead of 16 percent during FY 2021-22.

Similarly, he added, the Sales Tax ratio on 10 more services (beauty parlours, fashion designers, home chefs, architect, laundries and dry cleaners, supply of machinery, warehouses, dress designers and rental bulldozers etc.) would be reduced to 5 per cent from 16 percent during next FY. To a question, he said that since the 16 percent tax rate on cash payment and five percent through credit card at restaurants during the current FY had substantially helped in documentation of the economy, the five per cent tax rate through mobile wallet and QR code would continue in the next FY as well. The use of modern technologies in various sectors substantially helped improve the overall economy.

Hashim Jawan said that the industrial sector has great importance in overall economic growth; therefore, the Punjab government has increased its development allocation four times i.e. from Rs 3 billion to Rs 12 billion. He asserted that the programme for economic stimulus and growth worth Rs 10 billion would also be launched during the upcoming fiscal year.

To another question, he said that in an effort to control prices of essential items, the Punjab government had set up 362 Sahulat Bazaars in various districts of Punjab. He said that a Model Bazaar Authority was also being established that would set up model bazaars in all big cities of the province and funds of Rs 1.5 billion had been allocated for the purpose. The government has also been giving subsidies on wheat flour and other essentials, and a strategy was also being devised to ensure targeted subsidies so that maximum of the poor could benefit from it.

The provincial government with the assistance of World Bank, he added, would initiate a comprehensive project worth Rs 86 billion for provision of clean drinking water to 100 percent rural population as well as solid waste management and drainage facilities in 16 most underprivileged tehsils of Punjab.

Hashim said that the agriculture sector’s allocation included Rs 100 billion ‘Agriculture Transformation Plan’ under which Insaf Kisan Card had been issued; and Rs 4 billion agri subsidies would be given during the next FY.

Modernization of farm mechanization would be done at a cost of Rs 28 billion and four centres of excellence for conducting research on wheat, rice, corn and sugarcane would be established with a cost of Rs 10 billion. He said that Rs 18.5 billion would be spent in three year for bringing forth the services of the private sector through the Agriculture Extension Project. Similarly, Rs 5 billion would be spent under the National Programme for Improvement of Watercourses; and the total subsidy on loans for farmers/growers had also been increased to Rs 7.6 billion from Rs 5.85 billion.

To a query, he said that the overall Punjab Ehsaas Programme budget would be Rs 18 billion for next FY while it was Rs 12 billion in the current fiscal year. The provincial government had launched the Punjab Human Capital Project at a cost of Rs 53 billion and its scope would be extended to seven more districts during FY 2021-22.