Local police claimed Tuesday that kidnappers have released five hostages from the Katcha area in Shikarpur district as a result of police operation. “Bandits have released five hostages under the pressure of law enforcement,” police officials claimed. Five men released by the outlaws have been named Najeeb Pathan, Inayat, Abdul Hai, Manjhi and an unnamed person. District police said that the targeted operation will be continued till the arrest of the kidnappers and recovery of all people taken hostage by the bandits. Earlier, two more people were abducted from the Garhi Tegho in Katcha area of Shikarpur, raising the number of abductees from the area where police launched an operation against bandits to 10. A report said that the anti-bandit operation in the riverine forest area of Garhi Tegho in Shikarpur district remained suspended for the fourth consecutive day. “Even the intelligence-based targeted anti-bandit operation is yet to be started”, according to sources. SSP Shikarpur Tanveer Ahmed Tunio has said that surveillance drones are being used to monitor the forest area along the Indus river. “We have gathered information and made maps of different points in the katcha area,” the police chief said. 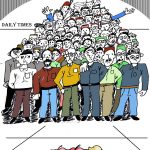