Punjab to spend Rs 560b on development in next FY 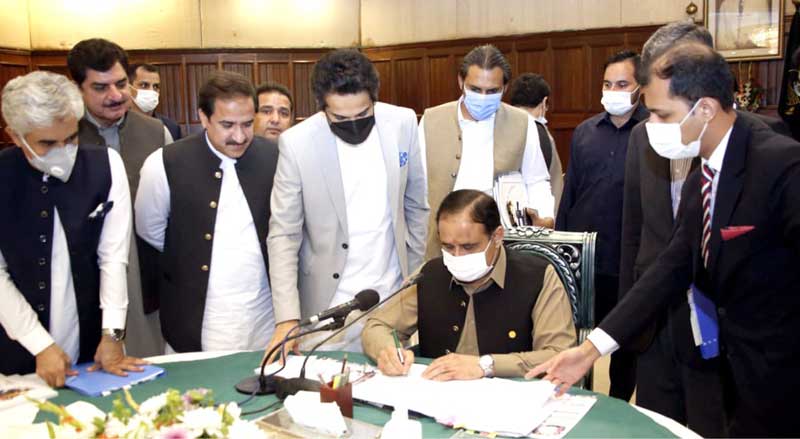 Provincial Finance Minister Makhdoom Hashim Jawan Bakhat said on Monday that a total of Rs 560 billion would be spent on developmental schemes/projects of various sectors during the next financial year (2021-2022).

During his budget speech in the assembly session here, he said that despite huge economic challenges and repercussions of the corona pandemic, the government managed to increase its ADP by 66 per cent by allocating Rs 560 billion for development expenditures against Rs 337 billion of current FY. He observed that the substantial increase in the ADP showed the seriousness of the present government towards development of the province.

He said that the Annual Development Programme had been prepared keeping in view the social development, economic growth and regional equalization; the very basis of the PTI manifesto.

He observed that the outbreak of coronavirus pandemic had altogether changed the global economic scenario, but the Punjab government despite having meager resources, had not only managed to overcome mortality rate due to corona but also ensure economic stability by giving Rs 56 billion historic relief package for the trade sector. Punjab was the only province which gave a hefty package of Rs 106 billion for families, whose livelihood was severely affected due to the covid-19, which gave tangible results. Despite reduction in tax ratio on more than 25 services, he mentioned, Punjab Revenue Authority (PRA) collected Rs 359 billion as tax revenue against Rs 317 billion target for the current fiscal year ending June 30.

The Punjab government for the first time in history of the province had paid special attention to south Punjab by allocating Rs 189,288 million under the Annual Development Plan (ADP) 2021-22 for South Punjab.Provincial Finance Minister Hashim Jawan Bakht while addressing the budget speech in the

Punjab Assembly on Monday said that this year’s development programme had been separately published in the budget document which was a proof of the incumbent government’s determination to protect the rights of people of south Punjab. He said allocation of Rs 189,288 million was 34 per cent of the annual development programme of Punjab. He said civil secretariats had been set up in Multan and Bahawalpur and funds were being allocated for the construction of buildings in this regard.

Rs 370b marked for health services

The Punjab government has earmarked a total Rs 370 billion for the health services in the province for the year 2021-22, including Rs 95.20 billion for different development programmes in the sector.

As per budget documents on Monday, Rs 78.70 billion had been allocated for the Specialized Healthcare & Medical education (SH&ME) and Rs 17.212 billion for the Primary and Healthcare (P&SH) while Rs 28.304 billion has been allocated for the SH&ME (South Punjab) and Rs 5.886 billion for the P&SH of the South Punjab districts. The government had also earmarked Rs 80 billion for Sehat Insaf Card under the Prime Minister Health Initiative in the province.

The Punjab government has earmarked Rs 175 million for new schemes of Chief Minister’s Programme for construction/rehabilitation/provision of missing Health Facilities in less developed areas of the province.

The Punjab government has earmarked an amount of Rs 442 billion for education sector in the provincial budget 2021-22.Punjab Finance Minister Makhdoom Hashim Jawan Bakht in his budget speech said that Rs 54 billion would be spent on development schemes and Rs 388 billion would be spent for current expenditures in education sector. He announced to launch Insaaf School Up-gradation Programme to ensure enrollment of maximum number of the out of school children to schools. He added that an amount of Rs 6.5 billion was allocated under the initiative to upgrade 8360 primary schools to the level of elementary which was 25 percent of the total schools in Punjab. The Finance Minister elaborated that 40 percent, out of the total 8360 schools, would be upgraded in South Punjab. He said that under the Insaaf School Programme, more than 2 million out of school children would be enrolled back to schools across the province.

An amount of Rs 23 billion has been allocated for the provision of education to 3.3 million children through the Punjab Education Foundation. Meanwhile, the Punjab government will spend Rs 15 billion for development initiatives of Higher Education which is 285 percent more than fiscal year 2020-21.

The Punjab government has established 6 new universities in various districts while approval has been granted to set up 8 more in Attock, Gujranwala, Rajanpur, Pakpattan, Hafizabad, Bhakkar, Layyah and Sialkot . During the next fiscal year, 7 new universities would be established in Bahawalnagar, Toba Tek

Singh, DG Khan, Kasur and Sheikhupura. He said the Punjab government would establish a world class Engineering and Technology university

education. According to budget documents, the Punjab government will continue Rehmatullil Alameen (PBUH ) scholarships with Rs 834 million and 15,000 students would get benefits under the scheme.

The Punjab government has earmarked Rs 17.212 billion for the Primary & Secondary Healthcare (P&SH) sector in the development budget for the financial year 2021-22.

According to the Annual Development Programme of the Budget 2021-22 on Monday, Rs 9.505 billion for the ongoing schemes of the P&SH while Rs 7.707 billion had been suggested for new schemes.

The government has allocated Rs 887.522 million for the Prime Minister Health Initiative whereas Rs 20 million has been allocated for the establishment of a Trauma Centre at Samundari, Faisalabad. An amount of Rs 500 million has been suggested for the Chief Minister’s Programme for construction/Rehabilitation/Provision of Missing Health Facilities in less Developed areas of the province. The Punjab government has earmarked Rs 4.826 billion for the 168 new schemes under District Development Package in which establishment of several Mother and Child Healthcare centres , trauma centres ,new hospitals, laboratories and upgradation of several health projects are being introduced.