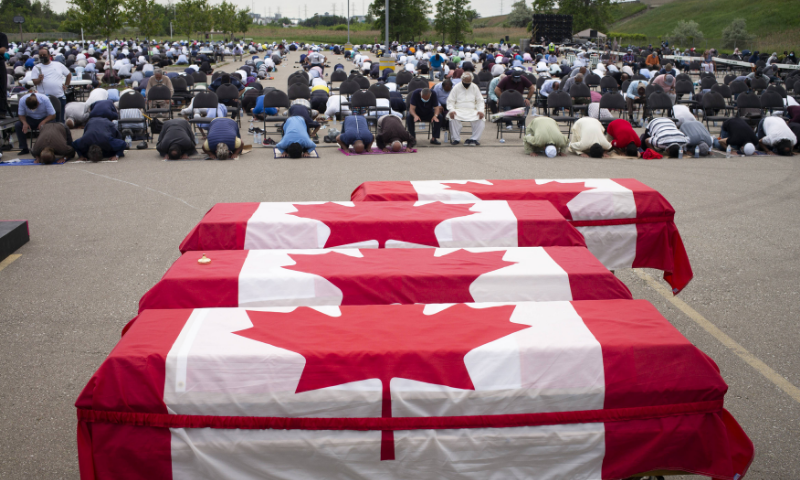 In a somber, mournful morning in the London area of Ontario, scores of people gathered to offer funeral prayers of the Pakistani-Canadian Muslim family killed by the driver of a pick-up truck, in an attack last week. The attack shocked Canadians and which Prime Minister Justin Trudeau called a terrorist. Four members of the Afzaal family — a man and his wife, their teenage daughter, and his mother — were out for a walk in their London neighborhood last Sunday when a 20-year-old man in a black pickup truck drove into them on purpose, according to authorities.

A fifth family member, a nine-year-old boy, was seriously injured.

On Saturday, hundreds of people filled a large parking lot and a football field next to the London Islamic center, where a private ceremony was held, to join in a public remembrance around the family’s four caskets, each covered with a Canadian flag.

“The very fact that their coffins are draped in the beautiful Canadian flag is a testimony of the fact that the entire Canadian nation stands with them,” Pakistan’s ambassador to Canada, Raza Bashir Tarar, told the crowd.

The ceremony, with brief remarks and prayers, was broadcast live on major Canadian networks.

“We are not alone in our grief,” said Ali Islam, an uncle of Madiha Salman, one of the victims. He stressed that the outpouring of support “has been the first step towards finding a way to heal”.

“We realized that our extended family was much larger than we could have ever imagined.”

Another speaker at the event, Sajid Ali Mohamed, noted that the attack on the Muslim family has been described as terrorism, instead of being blamed on mental illness.

“If it’s not a turning point, at least it’s a nudge in the right direction,” he said.

The funeral cortege then headed to a cemetery — as people lined the route in a show of solidarity — for the private burial of Salman Afzaal, 46, his wife Madiha, 44, their daughter Yumna, 15 and Salman’s mother Talat, 74.

Many people wore either green ribbons, in support of the Muslim community, or mauve ones, Yumna’s favorite color.

The attack has badly shaken the Muslim community and other Canadians as well.

Numerous vigils and solemn commemorations have taken place across Canada in recent days.

On Friday, several thousand people joined in an ecumenical walk through the streets of London, which is home to some 30,000 Muslims.

Many bore posters reading “We are all human” or “Hate kills.”

The latest attack has fuelled debate about the prevalence of Islamophobia in Canada and, within the Muslim community heightened fears that outward signs of religious affiliation can make a person a target.

In an interview with the CBC network, Prime Minister Imran Khan said the attack had shocked people across Pakistan.

He called on the international community to take action against “hate websites which create hatred amongst human beings”.

“Some international leaders, or leaders in the Western countries, actually don’t understand this phenomenon,” he added in excerpts of the interview released ahead of its broadcast on Sunday.

Twenty-year-old Nathaniel Veltman, who has no criminal record and no known link to any extremist group, has been charged in the attack with four counts of first-degree murder and one of attempted murder.

Police say the attack was planned and motivated by hatred, and have not ruled out adding terrorism-related charges.

Trudeau has promised to step up the fight against extremist groups.

Following the attack, Canadian deputies adopted a non-binding resolution, introduced by the left-leaning New Democratic Party, calling for a national summit on Islamophobia this summer — as many Canadian Muslim organisations have demanded.