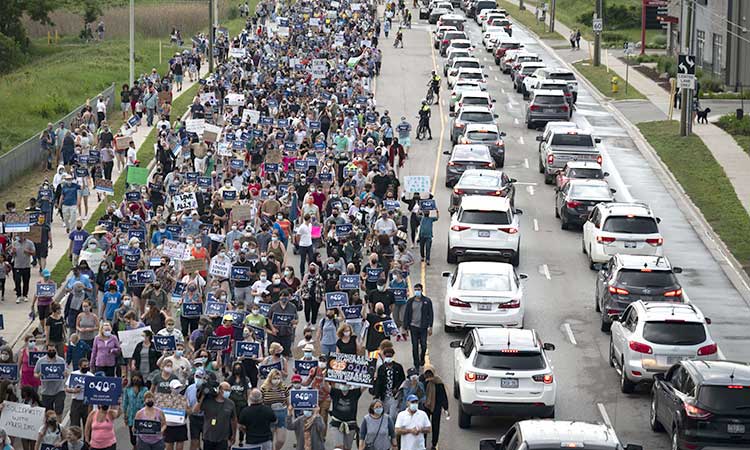 Several thousand people joined an interfaith marched on Friday evening honouring the four members of a Muslim Pakistani family who were killed in an attack that has shocked Canada.

The procession started at the site where three generations of a family out for a Sunday evening stroll — 46-year-old Salman Afzaal, his 44-year-old wife Madiha Salman, their 15-year-old daughter Yumna Salman and her 74-year-old grandmother, Talat Afzaal — were killed in London, southern Ontario, as they were waiting to cross the street.

The march against racism and Islamophobia culminated at London’s mosque, about 7 kilometers away.

The demonstrators, who included families with children, banged on drums while others sang John Lennon’s “Give Peace a Chance.” They held posters with messages like “Hate kills” and “We’re all human.”

After a moment of silence marking the time of the tragedy, representatives from several religions gave speeches denouncing hatred and saluting the outpouring of support for London’s 30,000-strong Muslim community. Other rallies or vigils in Canada on Friday took place in Toronto, Ottawa, Montreal and Quebec, where a shooting in a mosque left six dead in 2017.

Nathaniel Veltman, 20, has been charged with four counts of first degree murder and one count of attempted murder in the truck attack. If found guilty he faces life in prison. Prime Minister Justin Trudeau has called the assault — in which Veltman’s truck mounted a curb and struck the Afzaal family — a “terrorist attack.” Detective Superintendent Paul Waight, who is leading the investigation, has said there was evidence “that this was a planned, premeditated act, motivated by hate.”