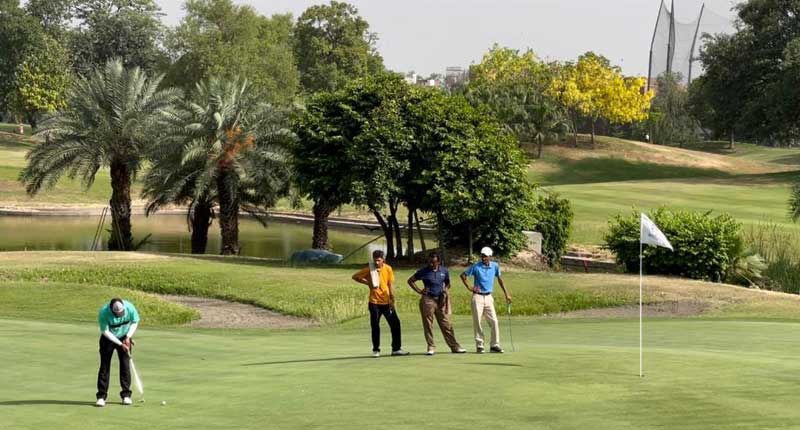 LAHORE: At the conclusion of the third round in the four-round Pakistan Golf Federation (PGF) Qualifying School Golf 2021-22, being fought out at the freshened up Royal Palm Golf Course, the career seeking professional golf player in command was Aamir Khan of Peshawar here on Thursday. Aamir Khan looked superb through commendable application of golfing skills which enabled him to excel over 120 other aspirants who made the cut and were exceedingly keen to attain top honours like Aamir but were unable to do so as they lacked the precision oriented hitting achieved by the leader. Over the three rounds, Aamir had scores of 72 in the first round, 73 in the second round and backed this up with another steady 73 in the third round. His overall aggregate gross score was 218, two over par and reflected admirable talent and adeptness under intense competitive conditions which included a blazing sun that also tested the physical stamina of the upcoming champion and his adversaries.

Besides Aamir, others in line for a good show were Aasher Masih of Lahore Gymkhana, Nasir Masih and Muhammad Saeed of Lahore Garrison followed by Shahbaz Masih of Karachi Golf Club. Aasher came up with an under par round of gross 70 on the third day and this was because of a harmonious effort on the greens which uplifted his position on the leaderboard to second slot. With a three rounds aggregate score of 219, he was placed one stroke behind leader Aamir. As for Nasir, he was placed at a three days score of 220 while Shahbaz and Saeed were placed at score of 222. A few more proficient ones in line for honours were Asif Shafi (Lahore Garrison) with three rounds score of 222. He has exhibited good command and control over his hitting. One stroke behind him at a score of 223 was Minhaj Maqsood of Rawalpindi Golf Club. Bunched together with Minhaj at score of 223 were four more forceful ones: Kamran Shafiq and Jafal Hussain, and Azhar Masood Khan and Muhammad Akhtar.