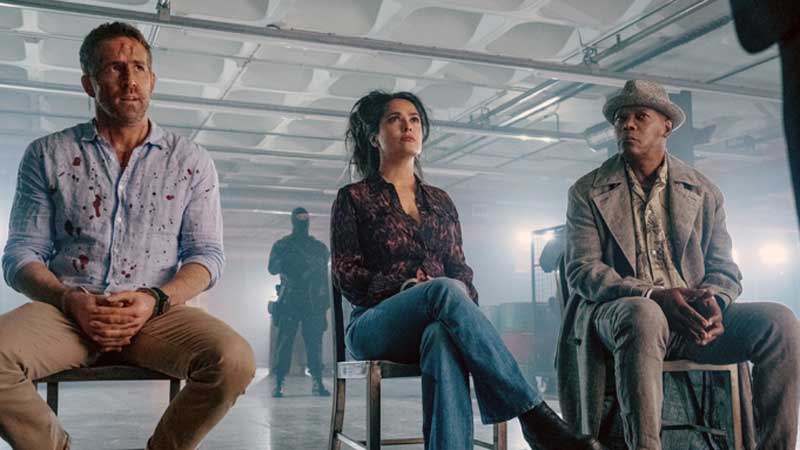 In “The Hitman’s Wife’s Bodyguard” (I think that’s the whole title — good thing the bodyguard didn’t have a dog), the gunshots are so loud they sound like they’re hitting a metal canister you’re trapped inside. Many of those shots are aimed right — splat! — at the head: This is an action comedy in which people get killed like flies, often with their brains splattered. At one point a truck blows up as it makes its way over a giant bridge, and for good measure the bridge blows up too.

The film seems to be saying, “Why not?” To describe the rollicking mayhem of “The Hitman’s Wife’s Bodyguard” as over-the-top would be an insult to the concept of having a top. It isn’t just the ultraviolent action that assaults you in a frenzy of debauched thriller hyperbole. So does the plot, which has something to do with Antonio Banderas as a pompadoured psycho in a smoking jacket who’s out to destroy Europe with a computer virus. What the story really has to do with, though, is the three title characters — the sociopathic hitman Darius Kincaid (Samuel L. Jackson), his seethingly ferocious con-artist wife, Sonia (Salma Hayek), and the ace bodyguard Michael Bryce (Ryan Reynolds), an ironically sensitive bespoke pussycat who’s along for the ride — pelting each other with every conceivable variation of threat, taunt, and insult. An even more gonzo sequel to the 2017 buddy-movie-on-Adderall “The Hitman’s Bodyguard,” “The Hitman’s Wife’s Bodyguard” is directed by Patrick Hughes as It’s like a movie written by the Shane Black of 30 years ago (“The Last Boy Scout”) turned into a brazenly corrupt parody of itself. So is it, you know, fun? At times it is; at others it’s exhausting. Let’s call the whole thing fun-xhausting. But a movie like this one, in its trivially unhinged and irresponsible way, does feel, at moments, like a cultural marker: the cinematic equivalent of defining deviancy down.