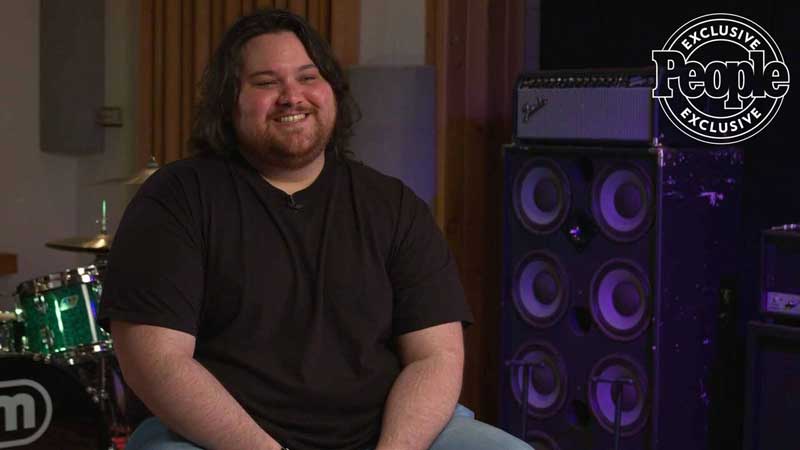 Wolfgang Van Halen is doing his own thing – and he wants you to listen. On Friday, Wolfgang, as one-man-band Mammoth WVH, will release his hard rock debut album, an introduction to the former Van Halen bassist’s solo musical trajectory.

“It’s as personal as can be,” the 30-year-old tells PEOPLE in this week’s issue. “Songwriting is a really therapeutic thing for me, so I was working out a lot of stuff with these songs.”

“Most of my lyrics are written at something or someone. It’s almost like an amalgamation of … You know how you always win arguments in the shower? It’s like that,” he explains. “It’s like anybody who’s ever done me wrong or used me, or lied to me, amalgamate into this one being that I write lyrics at.”

Wolfgang conceived the entirety of his album – which was put on hold for over two years while he cared for his dad Eddie as he battled lung cancer – inside the 5150 Studios where Van Halen recorded its biggest hits. “It’s a completely different beast. I’ve never done this before,” he says of recording the album on his own.

“A lot of people have, understandably, preconceived notions about what this must be. Like, ‘Oh, he’s the son, it must sound exactly like it.’ But I’ve done everything I can to be my own person. And I think it really shows on the album,” he says.

“It’s very freeing to start this path now, rather than doing what everybody would expect me to do, to get out there and just play covers of Van Halen songs. I don’t think I’d ever want to do that. Ever,” he adds.

As for the band’s name? Mammoth WVH takes inspiration from the original name of a band his dad Eddie started with his uncle Al and Mark Stone on bass. “Every time my dad would tell me that story, I always loved the name Mammoth so much that I would tell myself, ‘When I grow up, I’m going to call my own band that.’ And here we are,” he says. “It’s great, because it’s not sitting with the Van Halen name, but it’s tied to the lore, if you will. It’s got that historical relevancy to where I come from, but it takes it in another direction. I’m really happy with the choice.”

And with Mammoth WVH’s head-banging tracks and personal lyrics, Wolfgang successfully introduces himself as his own person. The album opens with “Mr. Ed” (no correlation to his dad) and is laced with hard rock tracks such as “Horribly Right” and “You’re to Blame,” where Wolfgang shines on every instrument from drums to the guitar. On “Circles,” Wolfgang takes it down a notch for a soft ballad that showcases his work on the guitar.

The album ends with “The Distance,” a track he wrote for his father before his death.

“Being able to focus on that and just pay tribute to my dad and our relationship was a really helpful thing for me to grieve in that way,” he says of the track.

Oh, and Eddie absolutely loved it. “He loved it so much. It was his favorite,” says Wolfgang. “He would always listen to it and be like … I’m sure it’s proud dad talk, but ‘Favorite album of all time.’ Always. It was the only thing he had on his phone.”

Paving his own path as a musician was something that Eddie always wanted for his son, Wolfgang says. Growing up, Eddie was never the best teacher, but “I think that allowed me to develop my own identity as a musician,” Wolfgang says. “I think that’s what he wanted most. I think it’d be really boring if I was just a carbon copy of him.” This summer, Wolfgang will head on tour as an opener for Guns N Roses. He is also set to host his monthly classic rock show Top of the Pack on Sirius XM starting this Friday.