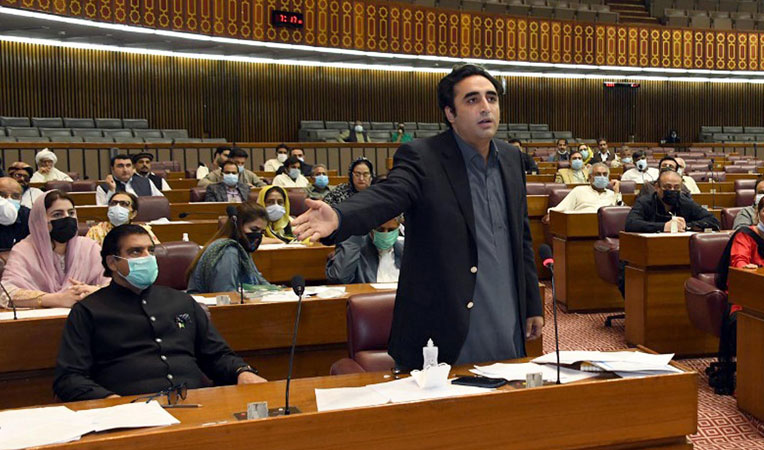 Pakistan People’s Party (PPP) Chairman Bilawal Bhutto Zardari on Thursday appealed to the National Assembly Speaker Asad Qaiser to assure the members that he will run the Lower House as well as standing committees in such a manner that public issues would be discussed and resolved there by the members instead of increasing the hardships of people.

“If we want to solve people’s problems, then the treasury benches will have to listen to the opposition’s point of view. One-sided legislations will be weak,” Bilawal said while speaking in the National Assembly. “In the entire world, both treasury and opposition’s views are listened to. We want a legislation with good points from the government and opposition both. Such legislations will be able to solve problems of the Pakistani people. If you do not listen to us and not allow us to speak, you will pass the bills in the standing committees by force and then table those in the NA, but you will be snatching our rights,” he asserted.

The PPP chairman said that the governments want to introduce electronic voting machines in the name of electoral reforms. “We all want to give voting rights to the overseas Pakistanis and we all want to do that but this is a very important bill. There could be many consequences of this bill. We have to discuss this bill in detail,” he said.

Regarding electronic voting machines, Bilawal said, “Can you guarantee that India and RAW will not be able to hack our machines and change the results. If the government has taken measures to protect the votes, then the opposition should be informed about that.” He said if the government wants to give Kulbhushan Jadhav any relief, then “why you gave the relief through an ordinance in the darkness of the night.” “If the government wanted to reach a consensus on the issue, it could have consulted the opposition but it did not do so. You wanted to be an ambassador of Kashmir but emerged as the counsel of Jadhav,” he added.