‘Loki’ — Disney Plus show is the most audacious MCU series yet

* The series opens with a scene from 'Avengers: Endgame,' in which Marvel's mightiest heroes have time-travelled back to the events of the first Avengers movie 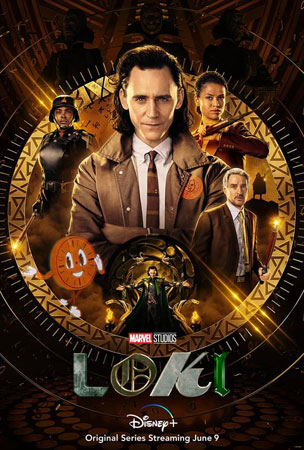 Norse deity Loki is infamously known as a god of mischief. So when Marvel’s version headlines his own show, a delicious streak of trickery will obviously run through the action. Tom Hiddleston is the perfect lead for this riotously imaginative new series, possibly the weirdest adventure in the Marvel Cinematic Universe yet. Loki premieres today, June 9, on Disney Plus, with a new episode streaming each week.

The series opens with a scene from Avengers: Endgame, in which Marvel’s mightiest heroes have time-travelled back to the events of the first Avengers movie and bumped into the God of Mischief when he was still the scamp we first met all those years ago. This past Loki hasn’t sought redemption for his villainy because that stuff hasn’t happened yet. So when this Loki scoops up a stray magical cube and uses it to escape, he sets the past on a different path. This brings him to the attention of a previously unseen agency of timecops, all set to wipe everyone’s favourite demented deity from existence – unless he turns out to be the key to a time-bending threat that could rewrite the entire MCU.

From this opening scene, the show immediately takes a sharp turn away from you might expect from a Marvel story. Not only that, but it sets out its stall with a glorious visual that involves, perhaps appropriately, Loki getting punched in the face.

Director Kate Herron continues this quirky and audacious visual style as the series soars into boldly imaginative new directions. This is very much not the meat-and-potatoes superhero action of The Falcon and the Winter Soldier. And if anything it has potential to get weirder than WandaVision.

That’s the foundation of the show’s appeal: It is uncharted territory. WandaVision drew us in with its mystery element, which the very familiar Falcon and Winter Soldier entirely lacked. Loki takes WandaVision’s weirdness and pushes even further into a whole new myth of the MCU that feels big enough to completely shake up the whole Marvel thing. After a decade, it’s thrilling to see there are still some surprises in the MCU.

From this opening scene, the show immediately takes a sharp turn away from you might expect from a Marvel story. Not only that, but it sets out its stall with a glorious visual that involves, perhaps appropriately, Loki getting punched in the face

The first episode in particular is stuffed with information and ideas, some of them cosmically huge in scope. It would be pretty dull if the main character just wandered around asking questions. But Loki isn’t one for questions. Unceremoniously dumped into the Gobi Desert at the very start of the show, his first response is to leap on a rock and awe the puzzled locals with a grandiose godly speech. It doesn’t last long. As the show continues you barely notice the landslide of exposition because you’re too busy enjoying Loki’s blustering arrogance smashing against the baffling new reality of the Time Variance Authority.

Crucially, Loki isn’t just a tour guide. Arguably, the big-screen Loki came to the end of his journey when he made peace with Thor, so rewinding back to the original trickster from his earliest appearances gives this version somewhere to go. He begins to grow immediately, making it easier to invest in this version of Loki rather than feeling like the show pointlessly wipes away the past few years.

A big part of Loki’s relatability comes from the charming chemistry between Hiddleston and Owen Wilson, inspired casting as time-twisting agent Major Mobius. They’re like a team-up between Hannibal Lector and Doctor Who. Wilson’s low-key intensity is an ideal foil for Loki’s thin-skinned hubris, their blossoming partnership giving weight to Loki’s actions.

And this is the God of Mischief we’re talking about. So while he’s a character we can root for, the reset also gives him back his edge. Crucially, there’s no telling what he’s actually planning. Loki’s volatile nature in this unfamiliar setting gives an air of unpredictability that sets the series apart from other Marvel titles and Hiddleston plays it perfectly.

All this is wrapped up in a gorgeous retrofuturistic world. Production designer Kasra Farahani coats the Time Variance Authority in brown and orange decor stuffed with pulp sci-fi technology, mixing holograms with reel-to-reel tapes and computers with cogs. There’s a dash of Wes Anderson quirkiness, a pinch of Terry Gilliam’s Brazil and a soupçon of Stanley Kubrick’s A Clockwork Orange.

Loki isn’t yet as bananas as the kaleidoscopic Legion, but it’s along those lines: a future dreamed up in the past — so dated that it’s timeless.

Even the pulsing electro score by Natalie Holt has a retro feel, recalling those combinations of classical music and early synthesizers. Themes of memory and nostalgia surface again and again, as the characters step from their futuristic-ish world into history, or at least a TV show’s depiction of history. All the time Loki chafes against the “sacred” path he’s supposed to be on. As a true agent of chaos, Loki is the perfect antihero to challenge questions of predetermination and free will. As a viewer you may have free will, but you may also find you absolutely have to keep watching this layered, inventive, enormously entertaining series.