CM Sindh should be thankful to PM, NEC for allocation of funds: Fehmida 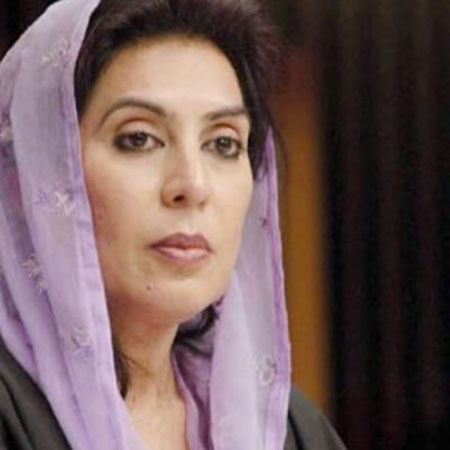 Minister for Inter Provincial Coordination (IPC), Dr Fehmida Mirza Wednesday said that Chief Minister Sindh should be thankful to the Prime Minister and the National Economic Council (NEC) for the funds allocated for the development of backward areas of Sindh.

Addressing a press conference along with Minister for Privatization Muhammad Mian Soomro here at Press Information Department, she said that the federal government had initiated several projects for the uplift of Sindh’s backward areas.

Fehmida said that Chief Minister Sindh’s recent press conference in Islamabad was very disappointing. “The PPP has been ruling Sindh for the last 13 years all alone but the people were deprived of basic human services there. One can even find dogs and cattle being tied in educational institutions and hospitals there.”

She said the Sindh government had also failed to provide dog-bite vaccines to the people. She said the funds provided by the federal government were meant for Sindh’s development.

“The Chief Minister Sindh would have inscribed his own name on the plates of these development projects.

“The people of Sindh were disappointed at his press conference,” she said, adding that Sindh should be saved by the plunderers.

She said that instead of criticizing the plans given by the centre, the Chief Minister should take part in the National Finance Commission (NFC) meeting.

She said that the lifestyle of ministers in Sindh was lavish but basic amenities were not available to the people. She asked the media to play its role by highlighting the deprivations of the people of Sindh.

Fehmida said that people in Sindh’s rural areas carry their patients to hospitals on tractor-trolleys. Construction of roads was the responsibility of the Sindh government but unfortunately, it had paid no attention towards that, she added.

Replying to a question, she said Sindh should get its due share in water adding that water should be equally distributed among all the provinces.

The minister said the Sindh cabinet wanted the federation to give money to the province but did not ask where it had been spent. In Sindh, if someone raises the issue of corruption in the use of funds, he is targeted, she said.

“The condition of infrastructure in Sindh is very bad, resources are in the hands of influential people. There is no monitoring system for the use of funds. Now, no one should object to accountability.”

She said the resources of the provinces have increased after the 18th amendment. She said that previous governments did not pay any attention to the telemetry system adding its installation was necessary at barrages.