Security advisor confirms US had military talks with Pakistan 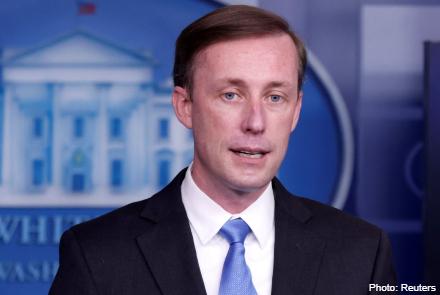 US National Security Advisor Jake Sullivan confirmed has confirmed that the United States had discussions with Pakistan in the military, intelligence and diplomatic channels to make sure that Afghanistan never again becomes a base from which terrorist groups would not attack the US – but he did not go into details about it, tolonews.com reported.
Sullivan made the remarks at a press briefing on Monday in response to a question on US’s willingness to have a drone base in Pakistan.

“We have had constructive discussions in the military, intelligence, and diplomatic channels with Pakistan about the future of America’s capabilities to ensure that Afghanistan never again becomes a base from which al Qaeda or Daesh or any other terrorist group can attack the United States,” Sullivan said. “But in terms of the specifics of what that will look like, that will have to remain in those private channels as we work through them.”
The New York Times reported this week that the CIA is seeking ways to maintain its intelligence-gathering, war-fighting and counterterrorism operations in the country,”, citing CIA analysts warning of the “ever-growing risks” of a Taliban takeover.
The report focused on Pakistan, saying “the CIA used a base there for years to launch drone strikes against militants in the country’s western mountains, but was kicked out of the facility in 2011, when US relations with Pakistan unraveled.
Any deal now would have to work around the uncomfortable reality that Pakistan’s government has long supported the Taliban.”
On the other hand, Foreign Minister Shah Mehmood Qureshi said that Pakistan wants a stable Afghanistan but there are some forces that do not want that. He said, “We want to see the peace process going forward along with the withdrawal of troops. The world does not consider Pakistan part of the problem.” The foreign minister said that he has told all political parties in a briefing that Pakistani bases will not be given to the US.
“Search for bases could be their wish. There’s no question of giving them bases, we have to see our interest.”