A staycation that earns a golden star 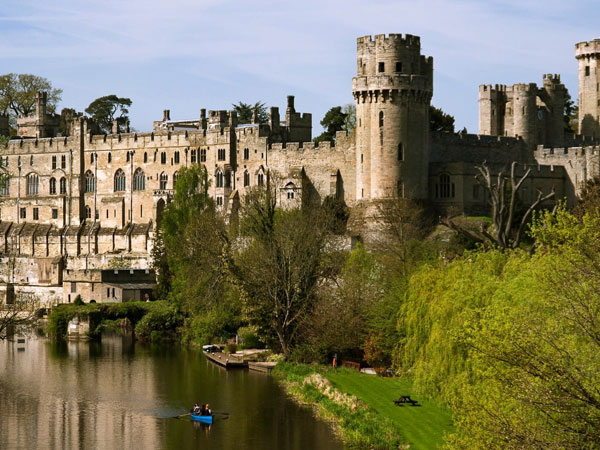 But now the excitement levels for young visitors to the medieval marvel have been raised sky-high, thanks to an interactive activity trail in the grounds based around Zog, the lovable dragon character created by Julia Donaldson – the Gruffalo author beloved by the Duke and Duchess of Cambridge – and a Zog ‘Play & Stay’ package.

We indulged our Zog-obsessed nearly-four-year-old daughter in the latter, which granted us a stay at the castle’s fun ‘Knight’s Village’ glampsite and a few exclusive Zog-themed extras that we’re certain will give us kudos with her for the rest of our days. Or at the very least, until next week. But as every parent knows, that’s still a precious win.

You’ll know you’re getting close to the entrance of Warwick Castle when you pass the olde-worlde-style signpost to owner Merlin Entertainment’s other attractions, such as Legoland Windsor Resort and Alton Towers

But after this, you enter a world that’s genuinely olde-worlde – and utterly fascinating for visitors of all ages.

We indulged our Zog-obsessed nearly- four-year-old daughter in the latter, which granted us a stay at the castle’s fun ‘Knight’s Village’ glampsite and a few exclusive Zog-themed extras that we’re certain will give us kudos with her for the rest of our days

The origins of the Grade I listed castle, which sits right next to the River Avon, can be traced all the way back to the year 914 AD, when Alfred The Great’s daughter, warrior queen Aethelflaed, Lady of the Mercians, established a wooden hilltop fort on the site. The rest, as they so often say, is history.

In 1068 William the Conqueror replaced the wooden fort with a motte-and-bailey castle, a stone castle was established on the site in the 12th century and its three mighty towers were constructed in the 14th century.

In 1604 King James I handed the castle over to Sir Fulke Greville and it remained in his family until 1978, when it was acquired by the Tussauds Group.

Today, it’s still rightly revered as one of the finest castles in the world, with lots to see and do.

In the stunning main house, we marvelled at the displays of armour and 17th-century tapestries, learned that the Greville family ‘perpetuated rumours that the ghost of Sir Fulke haunted the castle through his portrait… to attract interest in the castle’ and managed to spot the secret door in the Green Drawing Room.

I tackled the 500-plus steps of the ‘towers and ramparts’ walk on my own – the spiral staircases were too steep and narrow for my three-year-old – for blockbuster views of the quaint town and verdant surroundings.

But we reunited to enjoy the views from the more accessible fortress walls on the other side, ‘The Falconer’s Quest’ display – featuring spellbindingly choreographed birds of prey including owls and a Steller’s sea eagle – the Peacock Garden, where a resident peacock obligingly fanned its tail feathers, and the brilliant Horrible Histories Maze.

But my little one was most captivated by the Zog attractions. Once we’d bought her a Mr Whippy ice cream with a flake.

The activity trail follows the plot of the book which, for the uninitiated, centres around Zog’s quest for a golden star from his schoolteacher, Madam Dragon.

He must learn to fly, roar, breathe fire, capture a princess and learn to fight. In that order, from year one to five.

Here children are given a fabled golden star by Sir Gadabout the knight following a sword-fighting lesson on a grassy arena.

But first, they must collect stamps at four interactive displays spread throughout the grounds that cover Zog’s progress through the years at school.

For the ‘flying lesson’ they can have their picture taken with a flying Zog model near the entrance, then it’s off down the hill to jump up and down on big pads to make Zog and his classmates ‘roar’.

Next, it’s a dash into the maze area where they can pump water onto Zog as his friend, Princess Pearl, watches on.

Coaxing my little one away from this to the ‘year four’ princess-capture lesson – a dinky ‘assault course’ – took some doing.

But once she was there, while we gawped at the crenulation and the castle’s giant replica medieval trebuchet catapult nearby, she energetically ran loops around it.

And then she was heart-meltingly star-struck during the photo shoot with a full-size Zog character prior to us checking into the Knight’s Village, which nestles in a picturesque riverside spot right next to the main castle grounds, hidden from view.

We really enjoyed it there.

We were in one of six frankly magnificent ‘King Tents’, which meant sharing loos and showers but savouring accommodation that featured decking with a throne-style chair, a very comfy wooden four-poster bed with a coat of arms above it we could illuminate at the flick of a switch, two single beds, a wooden chest, a brace of floor-standing candelabra lights and the all-important royal power points.

There was also a pleasing amount of pleated drapery.

Our tent occupied a delightful position on the edge of the village next to a small riverside field. An idyllic scenario that seems ready-made for a Wind in the Willows glamping experience.

Before dinner came another Zog treat – ‘Princess Pearl’ reading the full story in the grounds of the castle after the public had left, while ‘Zog’ acted it out. With another photo opportunity.

The children were enthralled.

We dined afterwards in the village restaurant on burgers, fish and chips and fish fingers, for the little ‘un. Standard? Think award-winning, for a motorway service station. Vibe? Mostly medieval. The friendly waiting staff were sans period costume, but we did have lute music piped through speakers, wooden beams aplenty, castle-y banners hanging from the ceiling and superb costume-character knights that moved from table to table dispensing witty banter, which made the experience a fun one.

And afterwards, the pair staged a hilarious ‘fight to the death’ by the tents, which was an absolute riot.

Our little one was so exhausted from all the excitement that she was fast asleep as one of the knights acted out a bedtime dragon story in the riverside field.

Us parents listened in the gloaming, glasses of wine in hand, savouring the moment in our royal haven.

The next morning, we gorged on tasty bacon and eggs rolls served by Tony the chef from a humongous frying pan set up on a table in the middle of the village.

We would need the energy, for we had another day’s pass for the castle and our daughter looked ready to ace the interactive Zog trail. That day, as before, golden stars were handed out to children by the pouch-load – but Warwick Castle deserves one too, for a roaringly good Zog glamping experience that delights young and old in equal measure.