Murad launches anti-polio drive to cover over 9m children, including 2 mln in Karachi 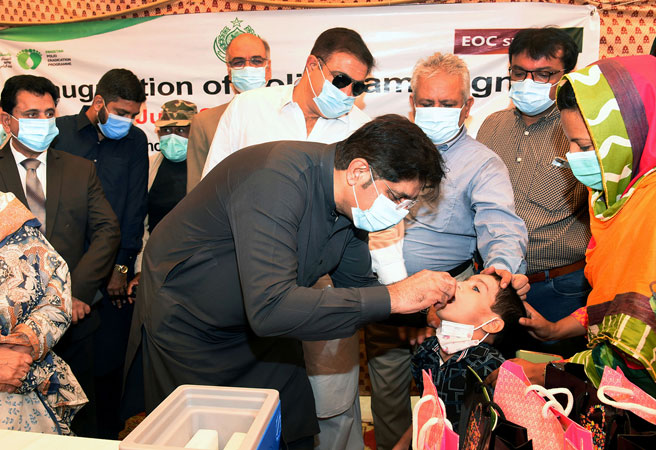 Sindh Chief Minister Syed Murad Ali Shah on Monday launching a province-wide polio campaign to cover over 9 million children of 5-years, said that Pakistan was one of the two polio-endemic countries in the world along with Afghanistan and has so far reported a total of one polio case in 2021 from Baluchistan, while no case has been reported in Sindh this year as compared to 22 cases in 2020.

This he said on Monday while talking to media just after inaugurating a seven-day province-wide polio campaign at Government Dispensary, Sultanabad.

Syed Murad Ali Shah said that the Emergency Operation Centre (EOC) in Sindh for polio was launching a province-wide polio campaign from June 07 to 13, 2021, as part of the sub national immunization days, to give oral polio drops to over 9 million children of 5-years across the province.

“This campaign will be conducted in all 30 districts of Sindh,” he said and added that out of over nine million children, more than two million belonged to Karachi.

“The campaign will be conducted whilst following strict WHO recommended COVID prevention protocols which include the wearing of masks by workers, their temperatures being checked before deployment, not handling children directly, not entering houses, spending limited time with families, and knocking on doors with pens, rulers or elbows rather than hands,” the CM said and added “as a result of the pandemic, the gap in campaigns from March to July 2020 coupled with routine immunization being affected left an immunity gap in children which we have been addressing through back-to-back monthly polio campaigns since August 2020.”

Thanks to these quality campaigns conducted by district teams, Sindh has not reported a single case of polio since July 2020 and environment samples are also now showing a negative trend which is good for the programme and the future of the children of Pakistan, Syed Murad Ali Shah said and added “ If we continue with the same momentum, we will further see significant results, but we must not get complacent and continue the hard work.”

The CM Sindh said that we understood that communities in the high-risk Union Councils for polio needed other basic services. “We are addressing this through new initiatives – we have opened dispensaries, EPI centers, mother and child health facilities and installation of water filter plants among other initiatives in eight super high-risk UCs of Karachi and during the polio campaign we will have health camps across all eight super high-risk UCs to cater to the healthcare needs of communities, especially women and children,” he said.

“While we deal with the pandemic, we must also deal with childhood immunization to prevent childhood diseases, the benefits of vaccination are clear as frequent campaigns have significantly reduced the burden of polio across the country,” he added.

Syed Murad Ali Shah said that children could be saved from childhood diseases like polio through vaccination and he sought support of the media to raise awareness regarding this. “Efforts in the programme have resulted in around 50 percent reduction in refusals and missed children but we must bring them down further, especially in Karachi,” he said.

The Pakistan Pediatric Association, Pakistan Medical Islamic Medical Association, medical experts across the world, as well as prominent religious scholars in Pakistan, and across the region endorse the oral polio vaccine as the safest and most effective for not only preventing polio but also eradicating it from the environment, the CM said and added the Polio vaccine was the safest and most effective way to save the children from polio.

The chief minister said that polio has no cure but can be easily prevented through vaccination and we are sending workers to your doorsteps so please cooperate with them and help save the future of Pakistan and eradicate polio.