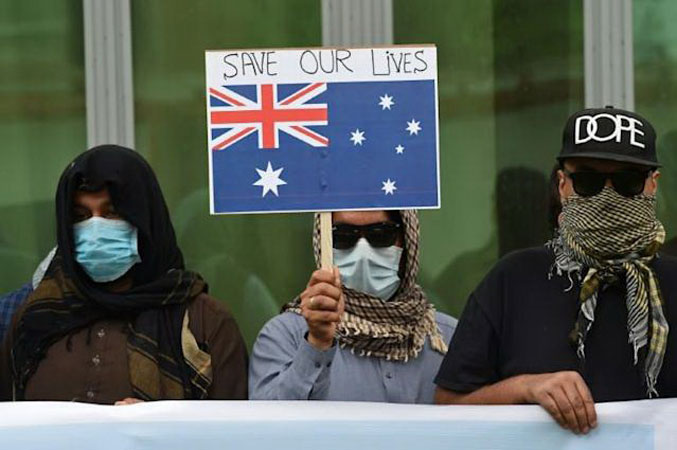 The Taliban said Monday that Afghans who worked with foreign forces in the past have nothing to fear once international troops leave, as long as they “show remorse”.

Thousands of Afghans have received visas to live abroad after serving alongside US and NATO troops — particularly as interpreters — but hundreds more are scrambling to leave before US President Joe Biden’s September 11 withdrawal deadline.

In recent weeks, many interpreters have demonstrated in Kabul, demanding foreign forces and embassies that they worked with help them relocate.

“They shall not be in any danger on our part,” the Taliban said in a statement.

“The Islamic Emirate would like to inform all the above people that they should show remorse for their past actions and must not engage in such activities in the future that amount to treason against Islam and the country.”

While Afghans were viewed as foes when they worked with foreign forces, they will not face any issues “when they abandon enemy ranks”, they added.

“Hence they should not remain fearful.”

Over the past two decades, dozens of Afghan translators have been killed and tortured in targeted assaults by the Taliban.

Afghan interpreter Mohammad Shoaib Walizada, who worked with the US army, dismissed the Taliban’s assurance.

“I don’t believe the Taliban… They are targeting journalists and media workers, why would they spare us?” Walizada told AFP on Monday.

“They never stick to their word or promise. They will take their revenge because they consider us agents or spies.”

“They are tracking us,” Omid Mahmoodi, an interpreter who worked with US forces between 2018 and 2020, told AFP last week.

“The Taliban will not pardon us. They will kill us and they will behead us.”

Another interpreter Omar, who worked with the US embassy for about 10 years, feared that without leaving the country, he would not evade the Taliban for long.

“I regret working for the US. It was the biggest mistake of my life,” said Omar, who asked AFP not to use his full name.

“My own uncle and cousins call me an agent of America.”

Last week, the Taliban sought to calm foreign embassies after the Australian mission in Kabul closed its doors.

The insurgents said they would provide a “safe environment” for these missions to work even after foreign forces leave the country.

US Secretary of State Antony Blinken said Monday that extra personnel were being tasked with looking at visa requests.

When asked during a congressional hearing by a Republican lawmaker if the interpreters should be evacuated, suggesting the US military withdrawal from Afghanistan could be “signing their death warrants”, Blinken responded: “We’re considering every option.”

“I wouldn’t necessarily equate departure of our forces in July, August or by early September with some kind of immediate deterioration in the situation,” Blinken said.

The leader of US forces in the region, Central Command commander General Kenneth McKenzie, said Monday that the interpreters could be evacuated even after the withdrawal of US troops has been completed.

“We will have the capability to exercise whatever orders we’re given,” he said.

“Clearly it is easier some times than others, but the United States military has remarkable capabilities for this type of thing. We can do whatever is going to be necessary, whenever it would be necessary.”