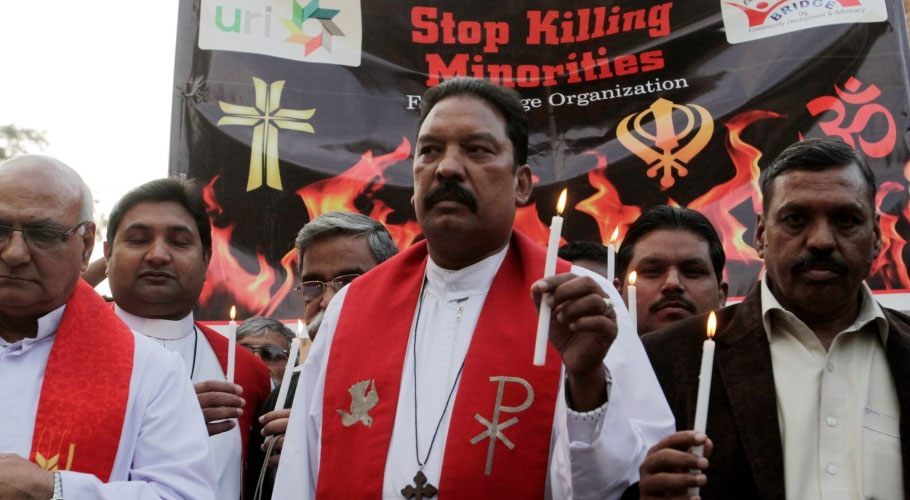 The Christian religious and political leadership has expressed serious reservations over the much-delayed results of the sixth Population and Housing Census-2017 pertaining to the population of minority communities.

According to the Pakistan Bureau of Statistics (PBS) report on minority population, released on May 18, Christians make up 1.27 per cent of the country’s total population of 207.68 million.
Voicing their concerns over the census results, released after three years of the official report, senior church leaders, politicians and community leaders said they were “disappointed” by the figures relating to Pakistani Christians which showed that their population has declined over almost two decades.

According to official estimates from the 1998 census, Christians made up 1.59 per cent of the total population (132 million at that time) whereas the Hindu population was reported to be 1.60 per cent. The 2017 census shows that Hindus now comprise 1.73 per cent of Pakistan’s population, making them the biggest minority group in the country.

Participating in an online discussion hosted by Christian media advocacy platform Kross Konnection, the president bishop of the largest Protestant denomination – the Church of Pakistan, Bishop Dr Azad Marshall said he was “shocked and disappointed” by the census results of the Christian population.

“I had voiced my concerns over the transparency of the census exercise when it was being conducted in 2016, and had also offered the church’s complete support but unfortunately the then government did not pay heed to our suggestions.”

“We believe that the figures pertaining to the Christian population have been grossly underreported in the 2017 census. Several factors may have contributed to the inaccuracy of the data, including ignoring Christians living in small pockets across the country, incomplete filling of the census forms as a large number of our community members are not educated enough, general ignorance of our people towards the importance of obtaining national identity cards and registering the birth of their children with NADRA etc. However, we can also not rule out hidden agendas behind the shockingly low numbers of the Christian population,” he said.

Bishop Marshall said the census results would have a direct impact on the political and social standing of Pakistani Christians. “We are taking this issue very seriously and the Church of Pakistan will do everything within its means to ensure that Christians across the country are properly enumerated and registered in government databases before the next official census,” he said.

He added that a mass awareness campaign will be planned in consultation and collaboration with other mainline church denominations and political and social activists to register Christians living in the country. “This is an important community issue and we believe that all Christians, irrespective of their religious and political affiliations, should come together and contribute to make this campaign successful,” he said.

Taking part in the discussion, Federal Parliamentary Secretary for Religious Affairs and Interfaith Harmony Shunila Ruth said she believed that the census data relating to Christians was inaccurate.

“I was an opposition member of the Punjab Assembly when the census exercise was conducted and even then I had objected to the manner in which this campaign was being conducted,” she said, adding that withholding of data relating to minorities for three years had made the whole exercise more suspicious.

“How is it possible that of all the other minorities, only the Christian population has shown a decline over the last two decades? Have Christian mothers stopped giving birth?” she asked.

Ms Ruth said that during the census data collection she had received several complaints from Christians that they were not properly guided during the filling of their forms. “The enumerators also failed to highlight the religion section of the form to the people. Other than this, I believe that illiteracy in our people has also contributed to the inaccuracy of data. Moreover, Christians generally do not know the importance of having CNICs and registering themselves in the voters list,” she added.

Ruth, who is also the president of the minority wing of the ruling Pakistan Tehreek-e-Insaf, said it was imperative that all Christian religious and political leaderships should forge unity in their ranks and gather on one platform to address challenges facing the community. “Our numbers will have a direct bearing on our political representation in the legislatures. Moreover, a large number of our people are left out of the government’s welfare and employment schemes because they don’t have their official documentation,” she added.

Also speaking on the occasion, Member of the National Commission for Minorities Albert David said that Christians should carry out their own census in 4-5 districts to check the authenticity of the data collected by the government.

“If the figures do not match the government numbers, we can then challenge the census results in the courts and demand a fresh census for minorities,” he said. He endorsed Bishop Marshall and Shunila Ruth’s suggestions for collaboration between Christian religious, political and community leaderships to achieve this task before the next census.

Commenting on the issue, researcher and journalist Asif Aqeel said that it was quite possible that the census drive had not covered the entire Christian population. “Illiteracy in our community is also a factor but we have to keep in mind that a large number of Christians have also migrated to other countries in wake of terrorist attacks on the community and other reasons,” he said.

Aqeel added that the census results would affect the political representation of Christians, therefore political activists would have to form a strategy in this regard. “We also cannot ignore the fact that there’s a huge Hindu population in Sindh and they are very organised, unlike Christians, a majority of whom are settled in Punjab,” he said.

Pakistan Bureau of Statistics (PBS) has posted the final results of the 6th Population and Housing Census 2017 on its website, according to which the country’s total population stands at 207.68 million, with an annual growth rate of 2.4 percent.