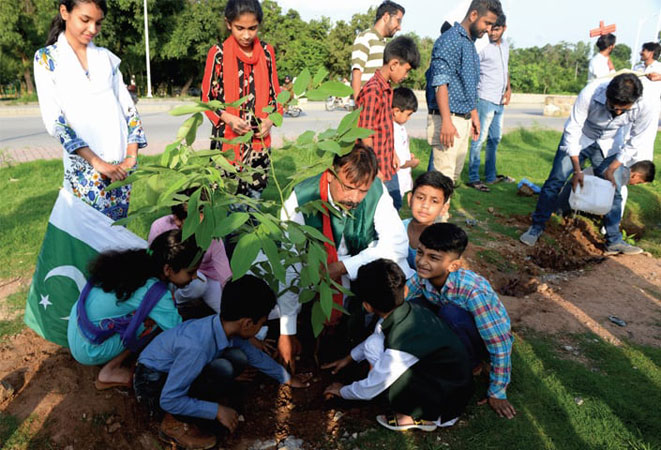 Restoring the ecosystem through sustainable measures will not only help protect the planet earth, but also improve the livelihood of its inhabitants, who are directly dependent on the green resources.

Besides, curbing diseases and lessening the risk of natural disasters is equally important to overcome the eco-degradation issues.

Having a look at various global survey reports showed that the top five global hazards, which the world is facing, are all related to the environment. Those include failure of climate change adaptation and mitigation, extreme weather events, major natural disasters and biodiversity loss, human-made environmental damage and global ecosystem-collapse, and related disasters. All ecosystems including forest covers, farmlands, wetlands and oceans can be restored in natural designs, only if the global restoration initiatives against the myriad and varied drivers of eco-degradation are launched, according to the published outcome of the 50th Annual Meeting of the World Economic Forum (WEF) 2020.

The report was derived from the results of an annual ‘Global Risks Perception Survey’ that was sent for comments to more than 800 member-countries of the WEF community.

Various world forums and bodies including UN and World Economic Forum (WEF) have acknowledged the efforts of Prime Minister Imran Khan for practically implementing their most ambitious forestation plans for expanding and restoring the country’s biodiversity, ecosystems, wetlands and forests through his ‘10 Billion Tree Tsunami” initiative, which spread over a period of five years.

Pakistan on Saturday hosted the World Environment Day 2021 main event, in partnership with the UN Environment Programme (UNEP). As the host of the event, Prime Minister Imran Khan highlighted the local and global environment degradation issues and showcased the country’s own initiatives before the world that his government was contributing to the global cause.

The ‘10 Billion Tree Tsunami’ initiative was perhaps the world’s largest struggle by a single country for restoring mangroves and forests, as well as planting trees in both urban and rural areas of the country, including schools, colleges, universities, barren areas, public parks and greenbelts, he said. He appreciated the government efforts for launching ’Ecosystem Restoration Fund’ to support nature-based solutions to mitigate climate change and eco-degradation issues, and facilitate the transition towards environmentally resilient, ecologically targeted initiatives while covering afforestation, wildlife and biodiversity conservation.

Executive Director of UNEP Inger Andersen, in a statement on June 5, said that Pakistan had shown real leadership in efforts to restore the country’s biodiversity and forests.

We are all grateful for their commitment to host the World Environment Day 2021, and lead the charge for all nations to restore our degraded ecosystems through the UN Decade on Ecosystem Restoration, she added.

This year, the main feature, for the observance of the World Environment Day was on the theme of ‘Ecosystem restoration’ and focus on resetting ‘Our relation with nature’, bringing an golden opportunity for Pakistan to also mark the formal opening and launch of the ‘UN Decade on Ecosystem Restoration 2021-2030’.