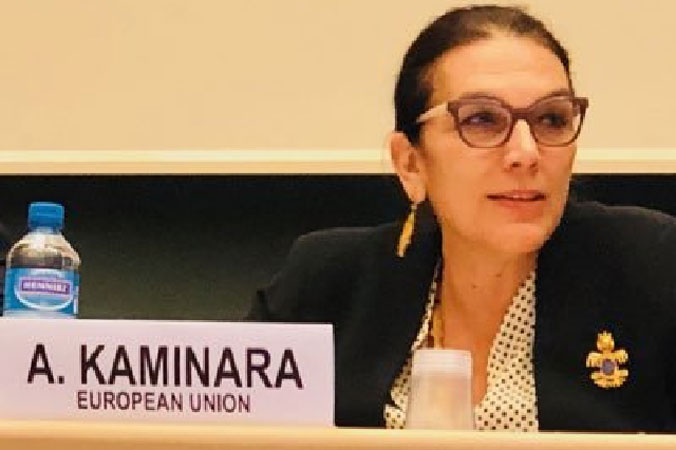 EU Ambassador to Pakistan Androulla Kaminara has said the European Union continued to support Pakistan in its efforts to strengthen good governance in the country.

To materialize the concept of good governance, the EU would fund a parliamentary project for capacity building of Pakistan’s legislators, she added.

Talking to APP, she said the EU would allocate Euro 9 million, which would be used to strengthen the functioning of public service offices in terms of building up capacity regarding the parliamentary core mandates of legislation, oversight, budget and representation.

The three-year project, to be implemented by the Deutsche Gesellschaft für Internationale Zusammenarbeit (GIZ) in collaboration with the Pakistan Institute for Parliamentary Services (PIPS), would work with the National Assembly, the Senate and the four provincial assemblies of Punjab, Khyber Pakhtunkhwa, Sindh and Balochistan, she added.

Androulla Kaminara said,“ The EU has been a steadfast supporter of democratic progress in Pakistan for many years and with today’s signature we enter the most ambitious phase of our support yet, focusing, for the first time, assemblies at the national and provincial levels at the same time. Good governance is the backbone of human and democratic development and plays a crucial role in poverty alleviation.”

The envoy said the new project would respond to the priorities of the EU-Pakistan Strategic Engagement Plan 2019, specifically to the joint priority “Democracy, Rule of Law, Good Governance and Human Rights” and was financed under the EU’s development cooperation priorities from 2014-2020.

Both strategic roadmaps supported the implementation of the Vision 2025 and helped achieve the Strategic Development Goals (SDGs) set by the United Nations in its Agenda 2030, she added.

The envoy said the EU would continue to support Pakistan in its efforts to tackle poverty, increase education, promote good governance, rule of law and ensure sustainable management of natural resources.

She lauded the services rendered by both GIZ Pakistan and PIPS for capacity building in the national institutions and expressed her satisfaction in launching the project.

Country Director GIZ Tobias Becker, in a statement, said “We are honoured that the Consortium of GIZ and PIPS has been entrusted by the EU Delegation and the Government of Pakistan, with the implementation of this highly significant project to support in the strengthening of democratic governance, and to work with the honourable members of Parliament and institutions that shape legislation and pave the way for the future human and democratic development of our partner country.”

PIPS Executive Director Muhammad Anwar said the EU’s Parliamentary Support Project was a landmark initiative as it would enable the institute to work closely with GIZ in assisting the members of parliament across both sides of isles to develop insights on their arduous tasks of representation, legislation and oversight of the executive by applying concepts of transparency, inclusivity and participation to achieve effectiveness and efficiency in parliamentary output at federal and provincial levels.

The project, he said, would also undertake capacity building of the secretariat staff of all legislatures in the country.