PTI to win 2023 elections on its performance: FM Qureshi 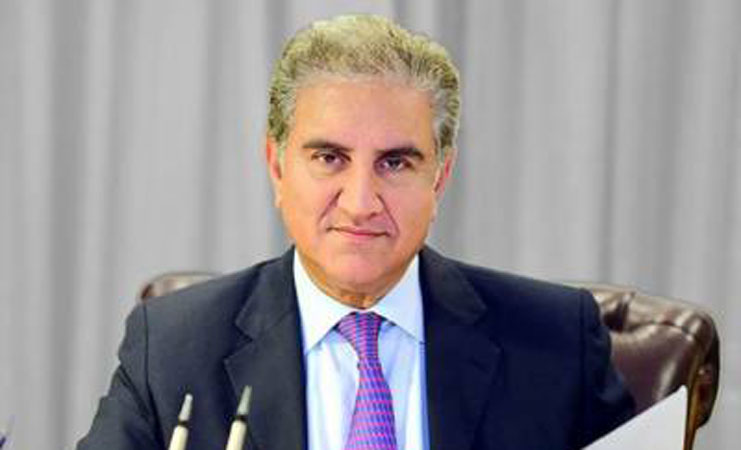 Foreign Minister Makhdoom Shah Mahmood Hussain Qureshi on Sunday said Pakistan Tehreek-e-Insaf (PTI) would not only complete its ongoing term but would also win elections 2023 on the basis of its performance.

While addressing a ceremony organized in his honour here, Makhdoom Shah Mahmood Qureshi said Prime Minister Imran Khan was taking a number of initiatives for prosperity of the country, however he would not give National Reconciliation Ordinance (NRO) to the corrupt elements. Prime Minister Imran Khan did incessant struggle in politics and broke the hegemonic culture of two-party system, prevailing in the country for many decades, he remarked.

The FM said even America and England failed to break-two party system but Chairman Pakistan Tehreek-e-Insaaf (PTI) remained committed to his cause and proved it. Once, there was a time when nobody was ready to take a PTI ticket, but Imran Khan continued his political journey and time has proved later there was a huge queue of candidates striving hard to get PTI tickets to contest general elections 2018.

Paying rich tribute to the political struggle of PM Imran Khan, Makhdoom Shah Mahmood Qureshi stated that Imran Khan laid the foundation of the party to bring real change in the country by curbing menace of corruption. Imran Khan is committed to end corruption and hold mafias accountable, Qureshi remarked.

Qureshi said the incumbent government would not only complete its term but results of elections 2023 would also be in favour of PTI.

Foreign Minister Qureshi stated that he earned immense respect and he felt honoured as the doors of Khana Kaa’ba were opened thrice for him, under the leadership of Prime Minister Imran Khan. He said when the PTI party manifesto was being prepared, he personally requested Imran Khan that there should be a separate province for deprived areas of South Punjab on the basis of devolution of power. “Imran Khan agreed with my stance and included the term of making South Punjab a separate province as part of the party manifesto”, Qureshi added.

He said only 17 percent of the budget had been spent on South Punjab in the past despite the major issues of sewerage, clean drinking water and others.

Qureshi said that he had no issue with metro bus service but the focus should be paid on basic problems of this area as PML (N) had power in Punjab.

He said that Punjab Finance Minister Hashim Jawan Bakhat told him that as per directives of Chief Minister Punjab, a separate annual development programme would be made for South Punjab through which funds could not be transferred to other districts. He said South Punjab has not been established officially so far because of not having two-third majority in assembly. The minister said that however, Prime Minister Imran Khan has laid the foundation stone of South Punjab Secretariat which was good news for all.

He said the establishment of South Punjab would not only empower the federal government but also bring changes in lives of the people and it would be proved in future.

He said South Punjab province would be established at any cost, adding that all hurdles being made by some spoilers to stop it’s establishment would be foiled. He lauded the untiring efforts of State Minister on Political Affairs Malik Amir Dogar for development of South Punjab. FM Qureshi also praised the role of media for the development of South Punjab and urged them to play their role in raising voice for the establishment of a separate province. Addressing the ceremony, State Minister on Political Affairs Malik Amir Dogar lauded FM Qureshi for his struggle regarding the ceasefire of Israel on Palestine. He said the role of Pakistan was being acknowledged by the international community. He said Pakistan’s foreign policy was zero before the PTI government and the country was going towards isolation but the way FM Qureshi started representing Pakistan in the world under the leadership of PM Imran Khan was commendable. He said the incumbent government has provided maximum relief to farmers and added that next year would be the years of prosperity, progress and development.