* Imran Khan says opposition is poised to topple PTI government unless their leaders are given an NRO
* Opp, media started questioning ‘Naya Pakistan’ vision within days of PTI taking charge 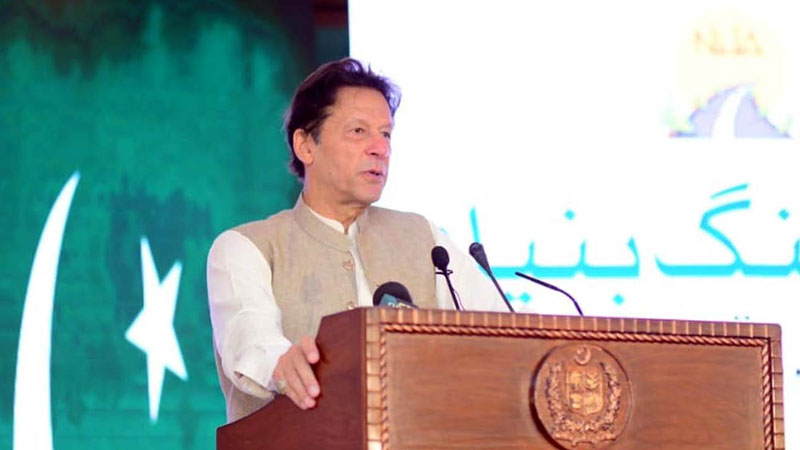 Prime Minister Imran Khan Friday said the opposition is poised to topple the PTI government unless their leaders are given an NRO.

“These self-proclaimed democrats are calling on the military to overthrow the government. Their [the Opposition’s] goal is to protect their interests and they are willing to do anything to overthrow the government because they have billions of dollars,” Imran Khan said while addressing the groundbreaking ceremony of Lodhran-Multan road. “From day one, the PTI government faced criticism from the opposition. My own people had to face a tough time. The media also gave an impression that Naya Pakistan can emerge by switching a button on,” he said.

Imran Khan said that within days of assuming the government, the opposition and media started questioning Naya Pakistan phenomena and also made notions about the government’s failure. “However, country’s economic turnaround has brought down the curtains on bad days and has heralded the time for economic growth, wealth creation and jobs for youth,” he said. “I believe we have gone through the worst time. Insha Allah (God willing), in the coming days, Pakistan’s growth will not be turbulent with up and down cycles. Pakistan will start its journey from when it was fourth largest economy in Asia in 1968 after Japan, China and India,” he said.

The prime minister said the incumbent government has constructed three times more road comparing the previous one which used to be known only for constructing the roads. He said it always took time to change the status quo as the mafias resist any movement of change to protect their interests. He said rule of law is the only factor behind the nations’ success as all the developed countries have no room for mafias and everyone is accountable before law.

He said Pakistan sailed through the Covid-19 pandemic owing to the government’s prudent policies contrary to India, despite the fact that both the countries had almost identical population density and weather conditions. He said government took a year to stabilize the economy and in second year it was hit by pandemic but it managed well by maintaining a balance between the lives and livelihood. Now, the prime minster said, as the economy has made a turnaround, the government is focusing the agriculture sector by ensuing timely and reasonable payments of crops to the farmers who also got bumper crop this year. Moreover, the government is about to announce a special package for the farmers besides promoting industrial sector through special economic zones to boost exports. Similarly, he said the IT sector was also under the government’s focus to exploit immense potential as India was earning around $80 billion from IT exports.

Imran Khan said the construction of 10 dams is in progress to produce clean energy and utilize the 50,000MW potential of hydropower. For the first time, massive scale plantation was being made under ten billion tree tsunami and new national parks being developed, he added.

He said as the Covid-19 curve was on downward trend particularly after mass vaccination, the government would make efforts to uplift the tourism sector which had the potential to increase foreign reserves remarkably. Referring to the government’s incentives for construction sector, the prime minister said banks had received demand of Rs 60 billion loans for low-cost houses from the people who could never imagine to own a house. He said the government is also mulling to introduce finance houses other than banks to exclusively disburse housing loans.

Separately, Prime Minister Imran Khan urged the world community to come together and join hands to protect ecosystem, increase tree-cover and save the global environment for coming generations. “It is time for the world to come together and save environment for our future generations,” Imran Khan said while addressing the virtual launch Gala of UN Decade on Ecosystem Restoration.

The prime minister said there was a need for all to protect ecosystem, environment and stop the rapid depletion of tree-cover as well as the degradation of environment. Sharing the country’s efforts towards improving the environment, Imran Khan pointed out that Pakistan, as part of the UN Decade of Ecosystem Restoration, had so far completed the plantation of one billion trees and its target was to plant 10 billion trees. Besides, he said, they had also started another ambitious programme of adding nine national parks to the existing 30, developed over the last 70 years, in the country.