‘The Conjuring: The Devil Made Me Do It’ should have stuck to the haunted houses

* It's part of the appeal of the conjuring films, that their vision of the world is so straightforward 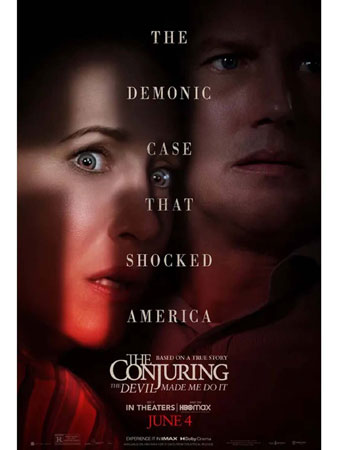 There are no moral panics in the Conjuring universe. Bathsheba Sherman, the infant-sacrificing ghoul who torments the Perron family in the first movie, is a descendant of a woman who was hanged during the Salem witch trials – the implication being that the executioners were onto something. The Conjuring 2 gives Ouija board burners their due by showing that playing around with a homemade version is all it takes to allow infernal elements into the Enfield council house in which the London-based sequel takes place. And the new The Conjuring: The Devil Made Me Do It takes paranormal investigators Ed and Lorraine Warren into the ’80s, where Satanists lurk in quiet communities, targeting children for dark rituals – an idea lifted directly out of alarmist news reports from the era. It’s not mass hysteria if you’re right, and in these films, the Warrens inevitably are, while their doubters and sceptics are soon cowed into submission by psychic displays or evidence of the supernatural. Thankfully for audiences as well as for the franchise, the real-life Warrens passed away before having a chance to get into QAnon.

It’s part of the appeal of the Conjuring films, that their vision of the world is so straightforward, disinterested in how reality’s complications can lead people to experience terrible things. They’re anti-psychological horror films, ones in which terrible things happen because of evil, which is not just present in everyday life, but tangible, spread like an infection by devil-worshippers, cursed locales, and occult objects into the homes of the unsuspecting. Then in come the Warrens, demonologists by way of sitcom parents who exude a reassuring certainty that there are external forces at work that can be diagnosed and defeated. This format has been effective enough to spawn a multi-tendriled, eight-films-strong franchise whose installments don’t all directly involve the Warrens, though none of the subsequent titles have lived up to the heady thrills of the 2013 original from James Wan, which was scary as all fuck.

‘The Devil Made Me Do It’ isn’t directed by Wan, but by The Curse of La Llorona’s Michael Chaves, who cribs capably from Wan’s approach to timing and misdirection without coming up with anything good enough to rival Lili Taylor being lured into the basement to play hide-and-clap with a ghost

‘The Devil Made Me Do It’ isn’t directed by Wan, but by The Curse of La Llorona’s Michael Chaves, who cribs capably from Wan’s approach to timing and misdirection without coming up with anything good enough to rival Lili Taylor being lured into the basement to play hide-and-clap with a ghost. It’s not Chaves’s takeover that makes this new film feel like it runs off the rails – it’s the choice to shift focus from a haunting to a murder. Possession has always been a part of the Conjuring films, with demon-controlled characters attempting to kill their children or themselves in climactic moments before the Warrens intervene. But in The Devil Made Me Do It, Arne Johnson actually manages to murder the landlord of the apartment he and his girlfriend, Debbie, rent – though, as the film would have it, it’s all due to the demon he absorbed during the exorcism of Debbie’s younger brother, David. The Warrens are too late to stop the killing, but they do approach Arne’s lawyer and offer to help her prove that he’s not guilty by reason of demonic possession.

Like its predecessors, The Devil Made Me Do It begins with a note about how it’s based on a true story, and ends with photos of the actual people involved. The franchise’s relationship with the truth has always bordered on camp: The real Warrens were publicity-seeking charlatans whose marriage allegedly included a longtime relationship Ed cultivated with an underage girl; in the real Arne Johnson case, the demonic-possession plea was immediately rejected by the judge. But the way this new film uses and excuses the actual killing of Alan Bono breaches the boundaries of what’s in good fun, not to mention good taste. Arne, who in real life was convicted of manslaughter, is blameless onscreen, having begged the demon possessing David, Father Karras style, to enter his body instead. He’s made into a martyr who battles for his soul while being left exposed to nefarious powers behind bars, while Debbie remains steadfastly by his side and the Warrens work to get to the bottom of what happened. The trial isn’t given much screen time, but it’s implied that the couple’s efforts played a key part in the defense, saving Arne from the death penalty as well as from a mysterious occultist played by Eugenie Bondurant.

And for all this, the scenes of Arne in jail are a suspense-less bore, interrupting the momentum of the film whenever it sees fit to cut to him. The Devil Made Me Do It has enough to figure out already without asking the audience to invest in a character who’s an empty vessel. It has to figure out what a Conjuring film looks like when it’s not about a particular location – though the film’s highlights, aside from an appearance by John Noble as a retired priest, remain the parts that stick closest to what’s familiar, when we see in flashback how David became possessed in the first place. It involves a wonderfully period-appropriate sequence with something lurking in the water bed that was left behind by the previous owners of the place that David’s family moves into. Staring at the space where the bed used to be, the Warrens discover stains on the floor – evil as a literal rot, eating away at the floorboards thanks to something foul underneath.

The conjurings have always been best when they’ve been nightmares about terrible things finding their way into the sanctity of a home, when they’ve played on paranoia about domestic spaces that are meant to be safe for a family actually being poisoned. The Devil Made Me Do It trains its gaze instead on the boy next door, and insists that it’s equally unimaginable that such a figure would do something as unimaginable as murder – that something else must be pulling the string. But the truth is, it’s not hard to imagine at all.