The Indian who took the Beatles home for tea 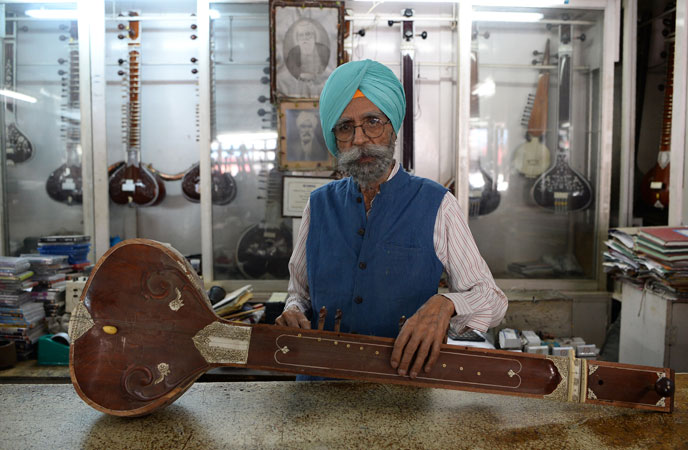 Ajit Singh, the Indian music shop owner who befriended the Beatles during their magical mystery trip in Rishikesh over half a century ago, has died aged 88.

In February 1968 the Fab Four fetched up at Maharishi Mahesh Yogi’s ashram in northern India, seeking spirituality, new experiences and refuge from Beatlemania back home.

Energised by their new surroundings overlooking the Ganges river, John Lennon, Paul McCartney, George Harrison and Ringo Starr wrote much of their seminal “White Album” there.

Turbaned, thin and with a croaky voice, Singh recalled in an interview with AFP in 2019 the band wandering into his musical instrument shop in nearby Dehradun one day.

Turbaned, thin and with a croaky voice, Singh recalled in an interview with AFP in 2019 the band wandering into his musical instrument shop in nearby Dehradun one day

He remembered hitting it off with the Liverpudlians, who had been pursued by a crowd outside, and “inviting them home for tea”. Later he fixed Lennon’s guitar and performed at Harrison’s 25th birthday party.

“They were very polite with me, they were not haughty or something,” he told AFP with twinkly eyes, in the shop that he still ran half a century later, the Pratap Music House.

“I always said to people that they were good people.”

Local journalist Raju Gusain, who has been at the forefront of restoring the rundown former ashram in recent years, said Singh thought Lennon was the most talented in the band.

“Ajit Singh was a lovely chap,” Gusain told AFP, confirming his death earlier this week, recalling how he loved to recount his old stories about the Beatles.

“He promised he would provide some photographs of Harrison’s birthday bash, but he failed to locate them and used to make excuses,” Gusain said.

“He said he was not that organised and would find them one day and give me a call. We both used to laugh about that.”

Singh was a highly accomplished musician in his own right, performing abroad and becoming one of the top-graded artists on All India Radio, according to The Times of India.

He was one of very few people who could play the vichitra veena, a traditional string instrument that rests horizontally in front of the kneeling musician.

“I used to tell Ajit… to pen down his experiences for posterity and write a book,” the paper quoted life-long friend Mercy Phuntsog Nath as saying. “He would nod his head and say, ‘I am writing’.”