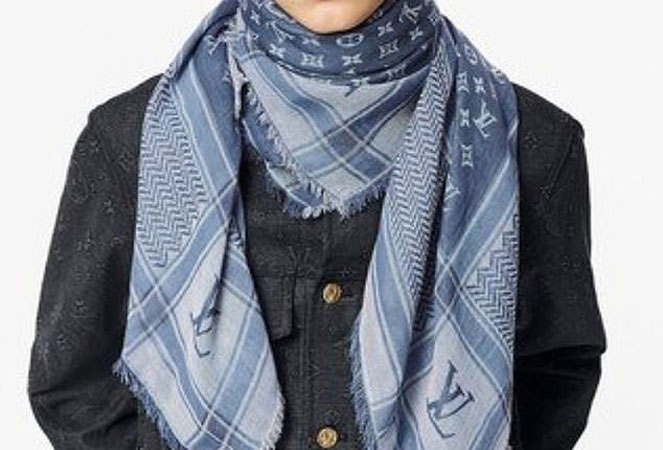 The stole that incorporates the jacquard weave technique used to create monogram patterns on its base of blended cotton, wool or silk, costs $705.

The brand, however, is being accused of cultural appropriation for creating a garment inspired by the classic keffiyeh, a symbol of Palestinian nationalism.

Diet Prada, an Instagram fashion watchdog, pointed out in a post, “So LVMH’s stance on politics is ‘neutral’, but they’re still making a $705 logo-emblazoned keffiyeh, which is a traditional Arab headdress that’s become a symbol of Palestinian nationalism.”

A traditional Arabian headdress, keffiyeh is a chequered cloth that is usually folded into a triangle and wrapped around the head or worn around the neck. Its significance dates back to the 1936 Arab Revolt, where Palestinian rebels used keffiyeh to hide their identity to avoid arrest. When the British mandate authorities banned the clothing item, all Palestinians started wearing it to make it harder to identify rebels. Its prominence increased during the 1960s around the time of the Palestinian resistance movement, and its adoption by Palestinian politician Yasser Arafat. The keffiyeh also gained popularity as an icon of solidarity among activists supporting Palestinians in conflict with Israel. Some soccer players were recently seen wearing keffiyeh on the football ground in the wake of the Gaza attack, while models Gigi and Bella Hadid also wore it at a pro-Palestinian march in Canada.

Besides accusing the fashion brand of “cultural appropriation” netizens were also quick to notice the colours on the keffiyeh – blue and white – and questioned whether the brand purposely chose the colours of Israel’s flag. A traditional Palestinian keffiyeh is black and white in colour, which came to be associated with Fatah, formerly Palestinian National Liberation Movement, a nationalist social-democratic political party. Later, the colours red and white were adopted by Palestinian Marxists.