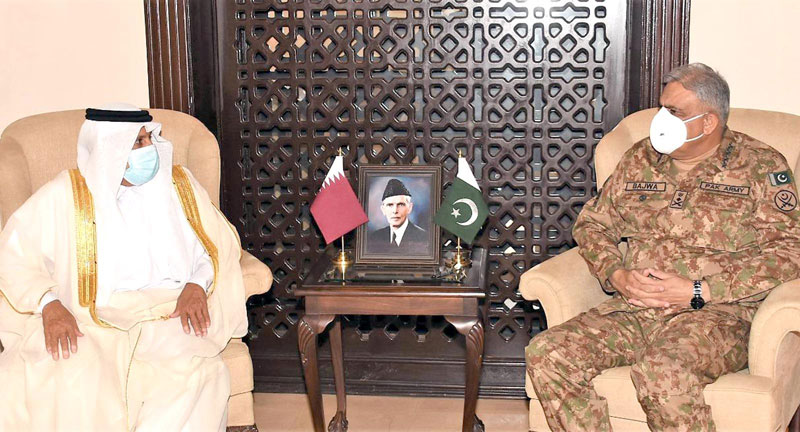 A member of the Qatari ruling family has appreciated Pakistan’s contributions for conflict prevention in the region and expressed a desire for enhanced Islamabad-Doha bilateral collaboration.

According to a statement issued by the Inter-Services Public Relations (ISPR) on Wednesday, Sheikh Ali Bin Abdullah Thani J Al Thani, chairman of Pakistan-Qatar Takaful Insurance Company and member of the royal family of Qatar, remarked this during his meeting with Chief of Army Staff (COAS) General Qamar Javed Bajwa.

During the meeting matters of mutual interest, regional security situation including recent developments in the Afghan peace process and bilateral cooperation in various fields were discussed.

The Chief of Army Staff said this during his visit to the field training area near Kotli on Wednesday, said a statement issued by the Inter-Services Public Relations (ISPR).

Appreciating the dedication and professionalism of participating troops, the COAS expressed satisfaction over combat readiness of the formation, said the military’s media wing.

The army chief was briefed about the conduct of a corps level exercise ‘Taskheer-e-Jabal’. The exercise is aimed at enhancing operational preparedness of formations, encompassing defensive and offensive tasks during various contingencies within an operational cycle. The troops and units participating in the exercise will rehearse various defensive and offensive manoeuvres in the mountainous terrain.