My headscarf represents where I come from: Malala 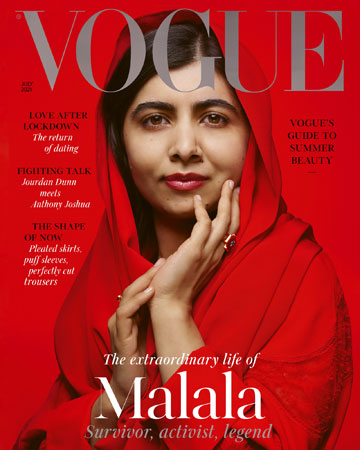 Pakistani activist Malala Yousafzai has yet another feather in her cap in the form of a British Vogue cover.

23-year-old Malala, who holds the distinction of being the youngest Nobel Peace Prize winner in history, sat down with British Vogue to talk about her life, where she comes from, her achievements, and her goals going forward in life as an Oxford graduate.

Malala, a Pashtun girl from Pakistan Swat Valley, got shot in the face by the Taliban when she was just 15 for refusing to waive off her right to education and has since resided in Birmingham where she was airlifted for treatment after the assassination attempt.

Talking about her roots and the headscarf that is a fixture of her image, Malala Yousafzai shared that it is about more than just being Muslim for her. “It’s a cultural symbol for us Pashtuns, so it represents where I come from.”

The July issue of British Vogue features more such details of Malala Yousafzai’s life and her struggle, much of which is misunderstood in her home country of Pakistan, a place she longs to visit but is denied due to security concerns.