A spectre is haunting Europe — the spectre of communism 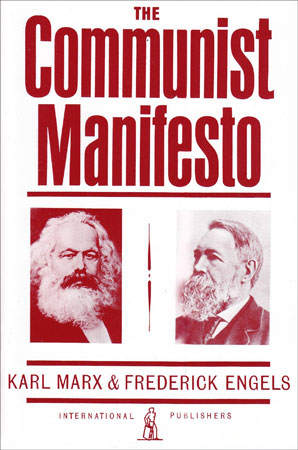 Communist Manifesto was written by two 19th century philosophers, economists and political theorists? viz. Karl Marx and Fredrick Engels and was published on February 21 1848. The manuscript was written for Commune league, initially a political organisation established in London in 1847, then an international association of working class. Written in German, the communist Manifesto was translated into English in 1850’s by Helen Macfarlane and later in 1871 different translations of Manifesto came out in America. However, the first authorised translator of Manifesto is Samuel Moore who worked along with Engels to translate the work meticulously including footnotes.

The language of Communist manifesto is brazenly clear and exciting. Marx and Engels have outrightly predicted the inevitable decay of Capitalism and subsequent reign of Communism. However, the book is classified into four sections with section three having further more sub-sections. The first section is about history of bourgeoisie and proletariat, briefly taking notes on how merchant class of industrial epoch crushed the feudal dispensation and Aristocratic classes of Middle Ages sprouting from the ruins of both. Further in the same section, reader comes to know history has been unfolding all due to strife between rival classes and that for solely economic reasons. As Marx avers: ” The history of all hitherto existing society is the history of class struggle.” There is no reason to disagree with this reasonable argument that history is of class struggle. In ancient age of Romans, it was between patricians and plebeians, in Middle Ages it was between serf and feudal lord, and in industrial age it was, and thus far is, between bourgeoisie and proletariat.

Interestingly, Marx and Engels sardonically and in vehement terms rebuked bourgeoisie class vis-à-vis family values. The argument was that bourgeoisie class has reduced family values to mere economic relationships of profit. Even, as said in Manifesto, marriages are confirmed on account of how that will help greasing the profiteering course in future. The woman was, as Marx and Engels mention, considered an instrument of production to produce childrens fostering Capitalism. This truly runs afoul of natural trajectory of human values that mark them off all other living organisms.

But, all in all, one cannot accuse and incriminate bourgeoisie class alone while vindicating the working class’ irrational devotion for a communist world. It really is not easy to establish a communist country. Needless to say, the squalid and miserable conditions of working class people are full of resentment against those who are perpetually snatching away their shares; but uprooting the entire system while installing another system which will again propel this vicious circle is not convincing.

Furthermore, the healthy spectrum of bourgeoisie-led-capitalism, as Marx concedes, is that by the nature of its beefing up more and more new instruments of production, Bourgeoisie draws all, even the most unruly nations into civilization. The chicanery is cheap prices of commodities, Marx calls this the heavy artillery with which it batters down all Chinese walls. The system creates a sort of doppelgänger which will further the bourgeoisie designs and shrink wage-labour. But however, it is arguable that does Capitalism really civilises unruly people in true sense of the word? Or merely turns them into a new form of vulturous people who only understand two words: buy or sell. This again is not convincing. In effect, the nature, and writings of Marx on communism, are sort of not crystal clear and are opaque with spaces of interpretation abounding.

The second section is about proletarians and communist; their convergences and possible divergences, if any. On which level does communism tout to be the representative of proletarians? And how communists present their credentials to nullify the nationalistic tinges of proletarians and think more broadly taking on board proletarians of all different countries? Marx and Engels argue that communism do not establish a separate party opposed to working class parties, rather it creates a level playing field for all working people. The unmistakeable difference is that communism finds and brings to the fore the common interests of proletarian belonging to different countries. In struggle against bourgeoisie, communists, unlike proletarians, represent and fight for common interests of all. Nonetheless, aim of both is same: ” Formation of proletariat into a class, overthrow of the bourgeoisie supremacy conquest of political power by supremacy.” Besides, Marx and Engle clearly write that every country have different state apparatuses and they hold their own way of fighting their exploiter. However, they are under no obligation to follow what European workers do, but their aim disrupting bourgeoisie must converge since that is what communism is based upon.

Fears and perils vis-à-vis communism of most people, particularly profiteering class, are abolition of property in general. However, Marx and Engels intend otherwise in Communist Manifesto snapping: ” You are horrified at our intending to do away with private property. But in your existing society, private property is already done away with for nine-tenth of population.” There is no mention of abolishing property in general in Manifesto, however, what is mentioned is the distinguishing feature of communism: not abolition of property generally but abolition of bourgeoisie property. Qualms about radical destroying of ideals, class distinctions, rapacious appropriation of collective labour are only qualms of bourgeoisie who fear losing Capital heaped and accrued on hard-won work of common worker. Better to disrupt the applecart of a bourgeoisie than buy into the bogus idea of progress and rationalism. In this sense, in succinct terms, if and only communism is defined in a single but seminal sentence, that would be: abolition of private property, as Marx and Engels write. The last two sections are about different branches of socialism and types of bourgeoisies. How petty- bourgeoisie buttress the ideals of appropriation and how conservative socialism endeavours to tone down the revolutionary aspect of socialism and reduce it to a mere cowering child satisfied with a toy. All these are explained very simply and logically. There are some secret agents always behind defaming socialism with irrational designs which are busted in this section.

The book is anyhow a very revealing and educating read. That said, Communist Manifesto struck a nerve in 1848 all across Europe, particularly in France, igniting the fire of revolution which took aback the ruling class of Europe. Anyone who is interested in Marxism and oppressed-oppressor dialectics is suggested to pick this book.

The article has been written and contributed by Shahab Akram who is a student, based in Turbat. He Tweets at @shahabakram6 and can be reached at shahabakram0852@gmail.com