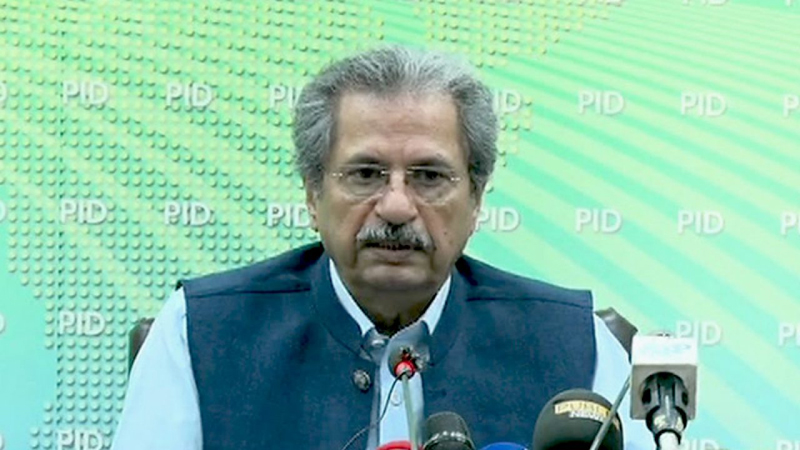 Federal Minister for Education Shafqat Mehmood reiterated that no student will be awarded grades or promoted to the next class without taking examinations.

He said, “If we do not conduct the exams, then students will not even employ minimum efforts to study,” during a press conference in Islamabad.

The press conference was held after a meeting of provincial education ministers and officials from the education departments, according to the ministry of education.

He also appreciated the efforts of the Inter-Provincial Education Ministers Conference (IPEMC) during the pandemic. He said that the IPEMC played an active role during the pandemic may it be closing or opening of schools and conducting exams.

We took some important decisions today Re exams. For 9/10, exam in elective subjects plus math. For 11/12 only elective subjects. Exams pushed to after July 10 with 10 and 12 grade exams on priority. These decisions are final. No change

“This decision has been taken as students have different streams and directions so they will sit in exams related only to their particular subject of interest,” he said.

All exams were cancelled in April due to the health concerns of students and parents. It was decided that exams will not take place till June 15th. Only students of A2 were given the option to take exams so that they could apply to foreign universities.

Addressing students’ grievances with respect to their coursework being incomplete, he said, “It was necessary to shut schools in view of the Covid-19 situation. There was also a risk associated with reopening schools due to fear of students contracting the disease”.

The minister stood by the committee’s earlier decision to not promote any students without examinations. He said, “ we still stand by that decision.”

He also said that the coursework was reduced by 40% and the overall nature of the assessment was also modified.

In a tweet later he explained that, “the marks percentage taken by students in elective subjects will also be proportionately allocated to subjects in which exams are not being taken.”

The marks percentage taken by students in elective subjects will also be proportionately allocated to subjects in which exams is not being taken https://t.co/0G6wimifzQ

Moreover, he added that exams will start from 10th of July so that students get at least three to four weeks to prepare. He also said that, “We are taking this decision to make the most of the current situation when Covid-19 cases have dropped.”

He also said that by the time the exams are conducted, all teachers will be vaccinated.

All universities are allowed to open from Monday https://t.co/D8SVs7CM5c

When talking about the mode of assessment, Mahmood said that the committee was of the belief that external examinations are the fairest assessments.

He added, “In England, parents are dissatisfied with assessed grades and are challenging them in court, but they have no reservation on external exams,” he said. “In our context, the majority of students are the ones who study just before two months of exams. If we do not take exams, it means students won’t study at all.”

He said that 30,000 students of A2 had appeared from across Pakistan and that the next exams will be held from 26th July to 6th August.

Those students who choose to appear for their A2 exams in the October-November sessions will be considered for conditional offers from colleges, he said.