Pakistan out of ‘bad times’: PM

* Imran Khan says opposition disputing GDP growth figures as it wants PTI government to fail on economic front
* Pakistan's future hinges on rule of law, across the board accountability and justice 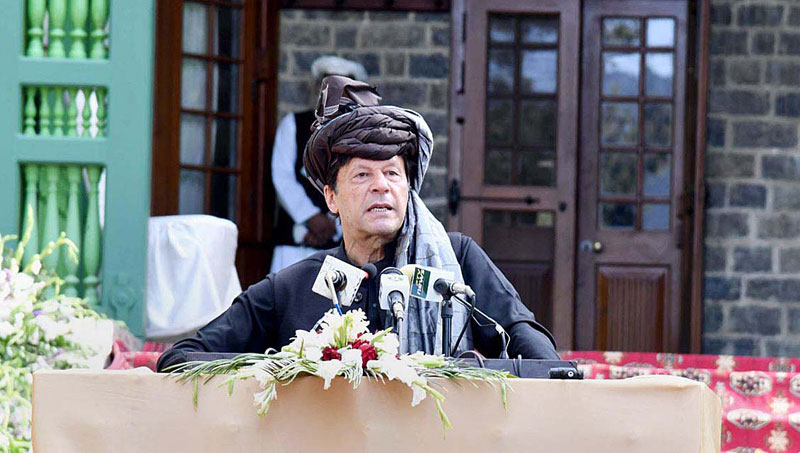 Prime Minister Imran Khan on Tuesday said that with gross domestic product (GDP) growth estimated at around 4% during the current fiscal (2020-21), the country has been steered out of economic hardships and is set to achieve further growth in the upcoming year.

Imran Khan expressed the optimism that the country will achieve further economic growth during the next fiscal year. “Pakistan will go further up [in economic terms] during our next government,” he said. “Despite the economic restraints due to the debt burden we inherited and the fact that there was coalition government in the province, the federal government is spending much in Balochistan because it owns the people of the province, which was neglected in the past,” he said. “Had the previous governments spent more in Balochistan, the situation would have been better,” he remarked.

Imran Khan said the leaders had two choices either to make money for themselves or spend on the nation. “If I think about palaces in London, how will I think about the nation,” he asked.

He said Ziarat could be turned into a tourism hub for enhancing the income of local populace and check poverty. He said Khyber Pakhtunkhwa, which had faced terrorism and even lost the lives of 500 policemen, achieved enhanced development during the 2013-18 government of Pakistan Tehrik-e-Insaf (PTI).

Later, addressing the participants of staff course at Command and Staff College Quetta, Prime Minister Imran Khan said the Pakistan Army produced unmatched results when pitched against its adversaries and successfully deterred the nefarious designs of Pakistan’s enemies. He said country’s defence is impregnable due to the professionalism of battle-hardened armed forces of Pakistan. He also deliberated upon his vision of future of Pakistan where the rule of law, across the board accountability and justice were order of the day. Establishment of a prosperous state in line with the Islamic principles and ideology of great leaders like Allama Iqbal and Quaid-e-Azam could be achieved only if they worked hard consistently as a nation, he added.

The prime minister said the government has made all-out efforts for making progress in various sectors like agriculture, industry, technology and automation.

He advised the participant officers to pursue their dreams without fear of failure to achieve their objectives.