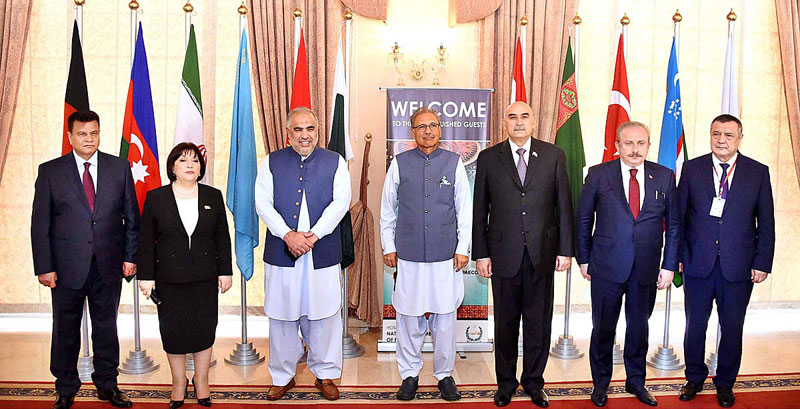 President Dr Arif Alvi has called upon the member countries of the Economic Cooperation Organisation (ECO) to develop a firm partnership to address the issues faced by them.

The president said this while addressing the inaugural session of the General Conference of the Parliamentary Assembly of ECO on Tuesday. The president said the ECO countries should further improve their relations through trade, tourism and economic linkages. He pointed out that the China-Pakistan Economic Corridor (CPEC) is an excellent example of cooperation which will link the Central Asian States with the seas.

The president said economic integration among regional states could act as an effective driver to foster sustainable peace and security. He emphasised that proper tapping of the region’s immense resources by ECO countries will nurture alliances for a win-win economic stability. “Your voice will only be heard on a global platform if you are economically strong and stable,” he said, stressing upon the need for a viable regional integration through open trade market for sustainable development and poverty alleviation.

Dr Alvi said the ECO region, with its eight million square kilometre land mass and 500 million people, comprised six percent of the world population and had the potential to become economic power through institutionalised trade policy reforms. In today’s world, he said, where morality was becoming irrelevant next to the oppressor’s own whims and wishes, a strong leadership and approach promoting the ethos of humanity was direly needed.

He mentioned the West’s double standards and hypocrisy in the name of “freedom of expression” where the incidents of blasphemy of the Holy Prophet (PBUH) were on rise compared with the intolerance against a slight discussion on Holocaust. He also pointed that labelling the freedom movement of Palestinians and Kashmiris as terrorism by Israel and India is another approach of seeing them through the prism of prejudice.

The president, however, categorically said that Pakistan’s stance on Israel’s violations of human rights was “not anti-Semitic, but anti-Zionist”. “We are against genocide. We are not against Jews or Christians, but against all oppressors of humanity,” he said.

“Anyone who resorts to oppression, we will raise our voices against them,” he added. The president expressed confidence that the Muslim world would join hands in giving the world a strong message on Islamophobia.

Addressing the session, Speaker National Assembly Asad Qaiser emphasised the need for greater cooperation amongst the regional countries to address the issues of poverty and illiteracy. He said, “We need to prepare a framework for effective cooperation.”

He said, “We have to benefit from the region’s geographical location for the development.” The speaker said that the railway track under CPEC will be beneficial for the entire Central Asian region.