* For example, the plot of Moll Flanders is of two parts and both the parts consist of episodes 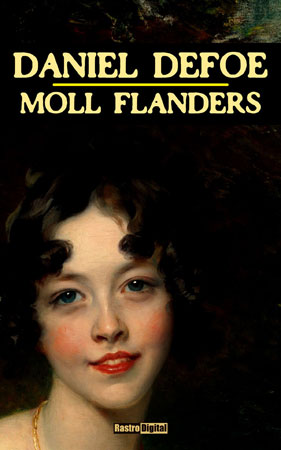 The economic development on the part of the individuals in Defoe’s time forced the people to emerge as stealers rather than beggars and Defoe was the first person to bring such individuals as his heroes.

And he went one step ahead in using a heroine to depict the same trend in his novel Moll Flanders who preferred stealing rather than begging and was arrested. “Defoe goes on to stress the practical moral, which is that the gentle woman should have ‘seized the next body that was behind her’, instead of crying out. In so doing, Defoe lives up to the didactic purpose” which establishes the fact that novels by Defoe were the first narratives displaying all elements of formal realism.

For example, the plot of Moll Flanders is of two parts and both the parts consist of episodes. The first part of the story is composed of multiple episodes of married life of the heroine while each part ended by the death of the husband or by his departure. The second part is criminal in nature. In one episode we see that the heroine runs an affair with a married man and in the second episode she helps her widow friend to secure a mate. And above all, he flouts the rules of narration and instead uses inconclusive endings which demonstrates his love for disorderliness which was so necessary to portray such women characters.

This women character by Defoe does possess womanly characteristic of being affectionate but she is not at all a sentimental. But it does not mean she is devoid of womanly qualities like love for clothes and love for the comfort of her family but she never intended to voluntarily enter into feminine, as is put by Virginia Woolf. The best example is that Moll Flanders left her half-brother who supposedly fell seriously ill, Moll had no concern with such developments because of her.

This female character by Defoe does possess a womanly characteristic of being affectionate but she is not at all a sentimental. But it does not mean she is devoid of womanly qualities like love for clothes and love for the comfort of her family but she never intended to voluntarily become a feminist, as
put by Virginia Woolf

On the social front as well, Defoe does not make her do house work and stresses on her being a successful person, be it as a thief, wife or mistress. He seems to have projected her a money conscious woman because she is capable of accumulating a fortune out of her gains gotten rightly or wrongly. The way Moll Flanders conducts herself makes her look like a cheater yet she is bold enough to accept it all. That bearing of character surely differentiates Moll from the traditional woman and the women of 18th century.

However, as per standards of morals of the age, it is still a question: whether Defoe was exposing the hypocrisy of women of the age or he was appreciating the struggle of women with their capabilities. The latter opinion should be given more validity because Defoe engaged himself in the individualism more than any other norm of the age. This over stress on individualism resembles a lot with individualism employed by Christopher Marlowe in his plays like Tamburlaine and Faustus. But this individualism created radically alienated individuals from the society.

This tendency of stressing on and expressing through ‘isolated individuals’ makes Defoe stand apart from his contemporaries and aligns him more with the writer of the ages that followed Defoe. According to Ian Watt, “only he among the great writers of past, has presented the struggle for survival in the bleak perspectives which recent history has brought back in commanding positions on the human stage”. These individuals may be isolated but they diverted the gaze of the world to different angel and it was especially in case of the women characters portrayed by the writer of past ages. This reminds us of the ‘Wife of Bath’ by Chaucer portrayed in 15th century in Prologue to the Canterbury Tales. Wife of Bath is similarly an individual character who wanted to hold her own even though it was against the norms of the age, especially about her FIVE marriages at the church door and many affairs and yet she held business, property and money with her skills. Wife of Bath by Chaucer is very contrastive in nature when compared to Prioress, another woman character of Chaucer, who was portrayed in conformity with the affected social norms of the age. Moll Flanders is, therefore, very close to Wife of Bath, rather than Prioress.

These and many other examples of individualism in Defoe’s writings, though mainly created because of his views on individualism, make him a feminist and even a post-feminist in his approach towards women as individuals because he did not only portray women struggling for their rights but utilizing their skills to procure an individual social and financial space for themselves, even if they contradicted with the moral norms of the age. These struggles of women were defended and supported by Virginia Woolf also when she questioned the legality of actions of men becoming immoral and illegal when done by women in her book Three Guineas. So, after Chaucer, it is Defoe who through his writings paved the way for feminism and Post-Feminism even before these movements took grounds in much later times.

This review has been written and contributed by Professor Dr Zia Ahmed who teaches at Government Emerson University, Multan. He can be reached at zeadogar@hotmail.com and Tweets at @Profzee