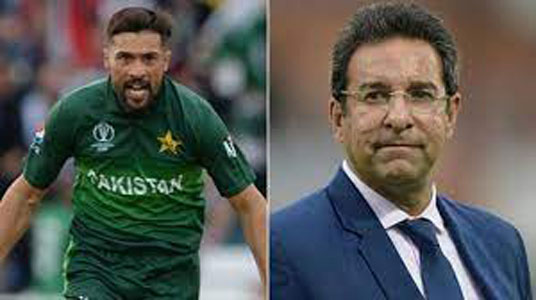 KARACHI: Pakistan’s young bowling line-up needs guidance from left-arm pace bowler Mohammed Amir, who quit international cricket late last year, former Pakistan paceman Wasim Akram has said. The former Pakistan captain, though, added that Amir’s decision to retire needs to be respected. “I still think he should have a place in the Pakistan team. We have three white-ball World Cups in the coming years. I have been saying for a long time that bowlers come in packs. When you have a senior bowler in the pack, he can guide the young bowlers in pressure situations by talking with them. They can have quite an impact by giving them confidence and providing them with options,” Akram said in an interview.

The three white-ball World Cups that Akram is referring to includes the T20 World Cup later this year and next year as well as the 50-over World Cup next year. “When I had a senior bowler guiding me as a young bowler, I had Imran [Khan] bhai and I would ask him before every ball. It gives you that added confidence when a senior bowler tells you to do something. I think that is also why Amir is so important,” he added. The 29-year-old Amir, who quit in December, 2020, is the most experienced among current lot as he had been on international circuit for over 11 years before he quit last year. Five of those 11 years, however, were wasted as he was serving a ban due to involvement in a spot-fixing scandal. Akram, however, backed Amir’s decision to quit saying he should be allowed to do whatever he can peacefully. “If he retired from Test cricket, it was his problem, his decision. Why are we going against someone because he retired? A player knows about his own body, especially a bowler. Test cricket is not easy. If you haven’t played first-class cricket for five years, then your muscles aren’t used to bowling for that long. Amir should just play his cricket and enjoy his family life as well,” added Akram.