Do justice, not politics, with us: Tareen 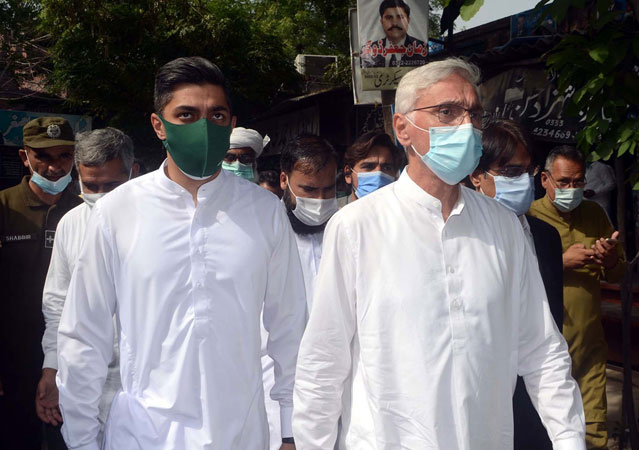 Estranged PTI leader Jehangir Tareen on Monday denied that he had held a meeting with any senior government official.

“I have had no meeting with any senior government official. There was no meeting and this news is wrong and based on misunderstanding. We are fighting our case in court and waiting for (Senator Barrister) Ali Zafar’s report,” he said while talking to media outside a banking court where he had appeared for a hearing into the case registered against him. He also called for justice to be done with him. “Don’t do politics with us, do justice with us.”

Tareen said speculations are doing the rounds that Zafar has provided a ‘verbal report’ to the prime minister, which he said, is in his favour. “Imran Khan promised justice will be done. A lot of days have passed, I should have got justice by now,” he said. “If justice is delayed then justice is not really served. The time for justice has come so the request is again to take action on whatever Zafar has said in his report,” he added.

When questioned if the report came against him would he accept it, the sugar baron answered, “We know some things which I don’t want to tell in the media. When the report comes and whatever happens, then I will put everything in front of the media.”

Earlier in the day, Tareen and his son Ali Tareen got extension in their interim bail till June 11 from two courts in three cases, registered by the Federal Investigation Agency (FIA) in connection with a sugar scam.

The two along with their counsel appeared before Additional District and Sessions Judge Hamid Hussain on expiry of their interim bail. At the outset of proceedings, the court observed that it did not have power to hear the matter any longer as a new judge had been posted as AD&SJ-I. The judge remarked that he was only empowered to fix the matter for the next hearing.

Subsequently, the court adjourned the hearing till June 11 and also extended the interim bail of Jahangir Tareen and Ali Tareen in two cases.

Meanwhile, the duo also appeared before a special court of banking offence in connection with another case, registered regarding a sugar scam. However, due to non-availability of the judge, their bail was extended till June 11.