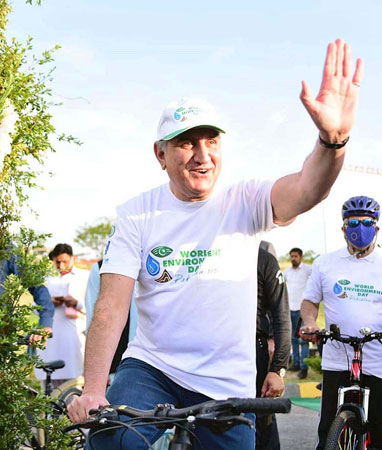 Foreign Minister Shah Mahmood Qureshi Monday urged the nations across the world to develop a global partnership to deal with the challenge of climate change as it was highly important for an agrarian economy like Pakistan.

He was addressing the participants of a cycle rally arranged by the Foreign Ministry in collaboration with the United Nations Development Programme and the Ministry of Climate Change in connection with World Environment Day.

This year, Pakistan will host the World Environment Day to be observed on June 5.

The foreign minister besides desiring to maintain peaceful relations with the nations, Pakistan also wanted to make a “peace with nature”.

He said Pakistan was one of the ten countries most vulnerable to climate change but unfortunately, its people were unaware of the threat, however, Prime Minister Imran Khan and his team led from the front to make them realize the seriousness of the situation.

Today, he said, Pakistan was getting international recognition for its role towards environmental protection. On the World Environment Day (June 5), Prime Minister Imran Khan would also announce environment friendly initiatives to cope with the challenge and preserve the natural environment.

Qureshi recalled that during the prime minister’s recent visit to Saudi Arabia, both the countries signed a memorandum of understanding for cooperation on the climate change issue.

He was happy that the countries were cooperating with one another to find a green solution to climate change, he added.

Foreign Minister Qureshi said the participation of federal ministers and diplomatic community in the cycle rally was meant to highlight the seriousness of the issue, which would go a long way to create awareness among the masses.

He said the government’s initiatives of 10 Billion Tree Tsunami, new electric vehicle policy and other environment projects showed its commitment to the issue, which was also being recognized internationally.