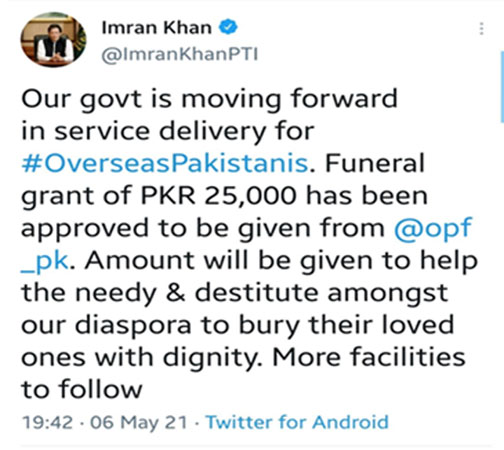 Overseas Pakistanis Foundation (OPF), since inception, has been assisting overseas Pakistanis working abroad and their families in Pakistan. A number of schemes have been introduced by the OPF which are directly beneficial to the overseas Pakistanis. The Main focus of OPF’s activities has been in the field of education, housing, financial assistance and other personalized welfare services.

To a question Dr. Amer Sheikh, Managing Director, OPF informed that, it has always been OPF’s endeavor to initiate new schemes and projects for the welfare and wellbeing of overseas Pakistanis and their families back home. The existing schemes are continuously being revised to make them more efficient in terms of service delivery for the benefit of the overseas Pakistanis working abroad and their dependents living in Pakistan, especially the financially vulnerable segment amongst the overseas Pakistanis.

To further elaborate, MD, OPF informed that, Pakistan was amongst the 180 plus countries dealing with the corona virus pandemic. The Government of Pakistan took unprecedented steps to counter the effects of Covid-19 crisis, along with facilitating overseas Pakistanis stranded/living abroad due to closure of Pakistanis airspace and travel restrictions imposed by the host governments especially in Gulf Coordination Countries (GCC) and Malaysia. ‘Emergency Cell’ was established in OPF on the direction of Special Assistant to the Prime Minister on Overseas Pakistanis & HRD. The said Cell assisted overseas Pakistanis and their families by responding to their queries and extending maximum possible assistance to them. The said Cell responded to 15,410 telephonic/WhatsApp calls and approximately 19,928 messages from overseas Pakistanis stranded abroad.

He further informed that, to cater to the financially vulnerable segment of overseas Pakistanis and their dependents, OPF had introduced Financial Aid Scheme in 1980-81 to provide financial assistance to the destitute families in the event of death or disability of overseas Pakistanis, while working abroad or a period of three years from the permanent return to Pakistan. Deceased and disabled overseas Pakistani should be a registered member of OPF. This is one-time non-refundable grant aimed to help the bereaved family to overcome their initial financial problems soon after the demise or disability of their earning members. Presently, OPF provides an amount of Rs. 400,000/- to the families of deceased overseas Pakistanis and Rs. 300,000/- to disabled applicants.

To another question MD, OPF said that, transportation of mortal remains of deceased overseas Pakistani is primarily the responsibility of the employer or the company where the individual was employed. However, every facilitation is provided by OPF through Pakistani Missions abroad for transportation of mortal remains to Pakistan in the shortest possible time. The section in OPF dealing with the subject is operational 24/7 throughout the year, keeping in view the sensitivity of the issue.

Since 2005 with the efforts of OPF, Pakistan International Airlines (PIA) has started transportation of the dead bodies of overseas Pakistanis free of charge throughout the world from where it is operating. Further, PIA also confirms two family members traveling with the dead body irrespective of flight position.

It is pertinent to mention here that OPF and the concerned Pakistani Mission abroad takes up the case of transportation of dead bodies on top priority basis; no complaint has been received from any quarter since the inception of this scheme. It is made sure by the concerned Pakistani Mission abroad that the dead body is transported on the first available flight after completion of the necessary formalities in the host country. On arrival of the dead body in Pakistan, OPF extends the facility of free transportation of dead body to the native town/village of the deceased through ambulance.

He further added that, in line with the vision of the honorable Prime Minister of Pakistan to provide maximum facilitation to overseas Pakistanis and on the directions of Sayed Zulfiqar Abbas Bukhari, Special Assistant to the Prime Minister on Overseas Pakistanis & Human Resource Development, yet again OPF has risen to the occasion to serve and facilitate its brethren who are an asset for the country in the time of their need. As per announcement of honorable Prime Minister of Pakistan on his Twitter account (Imran Khan @ImrankhanPTI), “Our government is moving forward in service delivery for #OverseasPakistanis. Funeral grant of PKR 25,000 has been approved to be given from @opf_pk. Amount will be given to help the needy & destitute amongst our diaspora to bury their loved ones with dignity. More facilities to follow”.

MD, OPF added that this funeral grant by OPF for the destitute and needy families of overseas Pakistanis @ Rs. 25,000/-., as announced by the Prime Minister of Pakistan will be given on priority basis for performance of last rights and burial in a dignified manner. Obviously, this grant would be governed by an approved disbursement criterion.