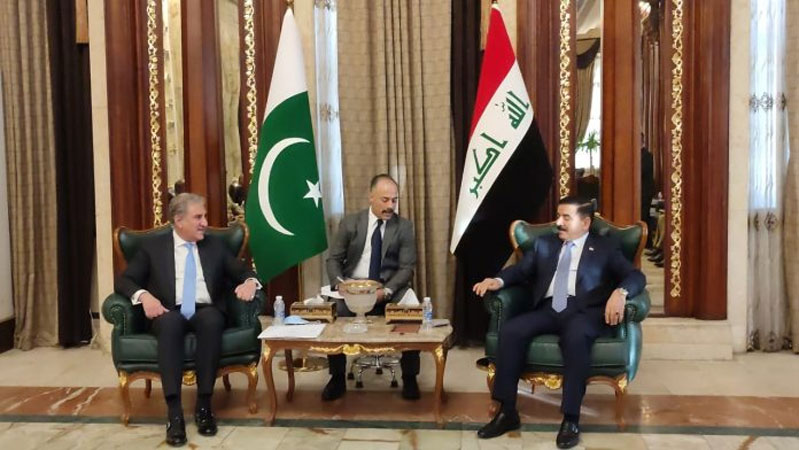 The participation of Iraqi paratroopers in Pakistan Day parade was a manifestation of stronger bilateral defence ties between the two countries, he added.

He said Pakistan lauded the sacrifices of Iraqis in the war against terrorism.

Qureshi also assured of Pakistan’s complete support, assistance and cooperation in the development and defence sectors of Iraq.

During the meeting, both sides resolved to work closely for regional stability.

Later, the foreign minister also wrote his expressions in the visitors’ book.

During the meeting, the foreign minister, who is on three-day visit to Iraq, discussed Muslim unity as well as facilitation of Pakistani pilgrims visiting holy sites in Iraq annually.

He said Pakistan and Iraq enjoyed brotherly ties based on religious and cultural values.

He said every year, around 200,000 Pakistani pilgrims visited Iraqi cities of Baghdad, Najaf and Karbala. He said the Pakistan’s government would announce a Pilgrims Management Policy for their facilitation for which both the countries would have to play their parts in its effective implementation.

Ayatullah Bashir Hussain Najafi thanked the foreign minister for visiting him and congratulated him on the success of Pakistan’s diplomatic mission for peace in Palestine.

Born in 1942, Ayatullah Najafi is a Twelver Shia Marja and one of the Four Grand Ayatollahs of Najaf, Iraq. Hailing from Gujranwala, Pakistan, Ayatullah Bashir Najafi got his initial education and moved to Iraq for studies in the early 1960s.