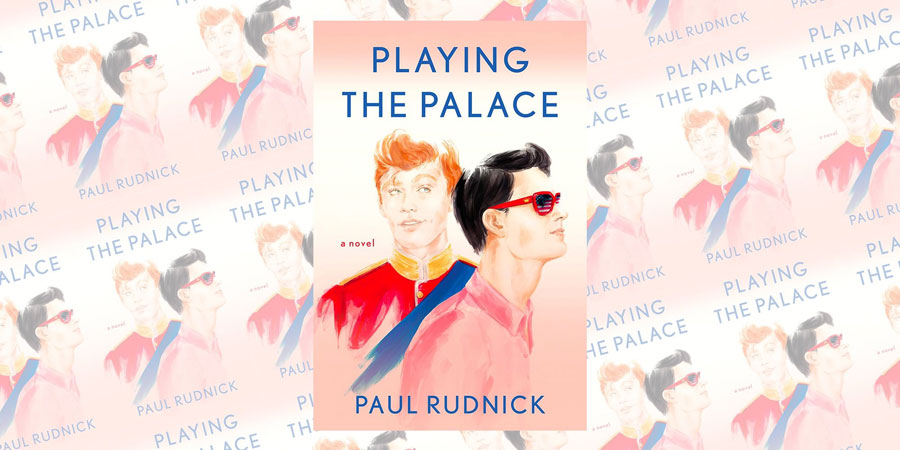 Paul Rudnick has written a romantic comedy with a royal twist. In “Playing the Palace,” the playwright, screenwriter and novelist has a witty, engaging book about two unlikely lovers: A Jewish man from New Jersey and the crown prince of England.

“I’ve never written an all-out romantic comedy like this,” says Rudnick, who put the finishing touches to the manuscript during the pandemic. “It was so much fun to live in that world and to just try a complete celebration without a whole lot of trauma.”

“Playing the Palace” is told from the slightly insecure perspective of Carter Ogden, a unhappily single associate event architect “barreling toward 30” who adores Ruth Bader Ginsberg and IHOP. He believes that New York’s St. Patrick’s Cathedral being located between a Tiffany’s and a Saks is “a sign of God’s admiration for high-end retail.”

His chance meeting with the drop-dead gorgeous Prince Edgar, the Prince of Wales, triggers a romance with international implications and tons of snarky tabloid headlines. Can these two very different men make it?

“I’m a Jewish guy from New Jersey. I thought, ‘OK, that’s about as far away from the royal family as you can get,’ which made it sound like the most fun,” says Rudnick. “I also wanted a story about people of wildly different social status.”

Playing the Palace is told from the slightly insecure perspective of Carter Ogden, an unhappily single associate event architect ‘barreling toward 30’ who adores Ruth Bader Ginsberg and IHOP

Rudnick shares in the overwhelming fascination with the British royal family and weaves in references to Brexit, Buckingham Palace and “The Great British Bake Off.”

“What I really love about Paul is that he gives such specificity to his characters so that even if he’s making them larger to life, they still feel very human and relatable because it’s the details that really bring them to life,” said Cindy Hwang, his editor at Berkley, an imprint of Penguin Random House.

The book arrives on a wave of interest in the royals, especially in Prince Harry and his biracial American wife, Meghan, who are redefining who belongs in the House of Windsor.

“It just felt like there was something in the air,” says Rudnick. “There was sort of a sense of inevitability that, ‘OK, the royal family is progressing and this sort of romance is becoming far more possible.'”

“There are so many completely valid and very necessary stories of prejudice against gay people and the trauma of coming out and family oppression,” he says. “But there also needs to be a balance of completely joyous queer love stories and stories about people who are wildly and openly gay and that’s just a given.”

The book is not the first to portray a same-sex American-British royal love – think “Red, White & Royal Blue” – but it sparkles with Rudnick’s take, and his publisher hopes it attracts a large audience.

Rudnick approached the sex scenes in the same way he did the rest of the novel, with humor and heart. “I think sex scenes in any book can get very clunky and very embarrassing. And you want to avoid the cringe factor,” he says.

“In romance books, they can sometimes be absolutely pornographic or they can be completely only vaguely suggestive. I wanted to land somewhere in between the two.”

Rudnick also uses the figure of Edgar – a witty, charming self-aware royal who jokes privately “I could have you beheaded” – to explore the isolating nature of mega-fame and the expectations put on pioneering gay figures.

“Because he’s the first openly gay royal, that comes with the enormous responsibility of representation,” says Rudnick. “You have to satisfy everyone’s dream of a very powerful gay figure.”

Rudnick started thinking about a royal romance as long as two decades ago and even had the title. But he didn’t always know what form it should take – stage play, movie or novel.

“Nothing ever quite fit until I began working on it as a novel. And that’s one of the very few things I’ve learned in my career: Let the material dictate the form,” he said. “I always start from the point of ‘OK, let the characters say where they want to make a home.'”