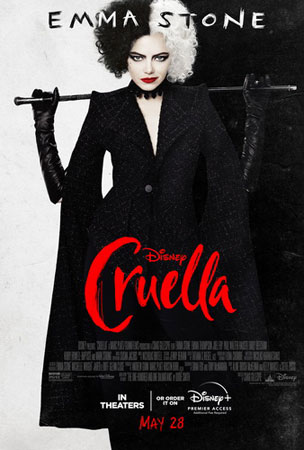 “Cruella De Vil, Cruella De Vil, if she doesn’t scare you, no evil thing will” One of the most memorable villains in cinema history, Cruella is probably overdue for an origins story, which opens with the young Estella witnessing the death of her mother, which she blames on herself. Running away to London, Estella falls in with a pair of Dickensian street-urchins and grows up an accomplished grifter in the company of Jasper and Horace. Obsessed with the haute couture designs of the Baroness, Estella finds her ambitions thwarted, at which point she unleashes her ruthless alter ego, Cruella Written by Dana Fox and Tony McNamara, and directed by Craig Gillespie, Cruella is a rather edgy Disney movie in that the traditional tale of good vs evil is replaced by evil vs eviler: the sociopathic Baroness terrifies everyone she encounters until she matches wits with Cruella, who is utterly single-minded in her desire to succeed. Indeed, you don’t have to scratch the surface too deeply to realise that this is a timeless tale: Cruella and the Baroness aren’t just playing out the time-honoured roles of inter-generational conflict, but are so similar in personality and behaviour that they are virtually mirror-images who are reflected back at one another as they seek to determine who is the fairest one of all.