No party can expel another from PDM, says Shehbaz 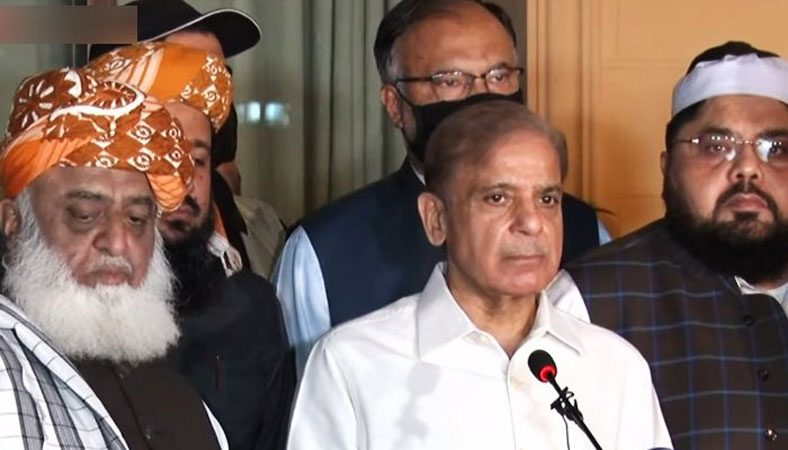 Leader of the Opposition in National Assembly Shehbaz Sharif on Friday said that no party has the right to kick out another from the Pakistan Democratic Movement (PDM).

“No party has the right to bring or kick another party out [of the allaince]. PDM is a forum and decisions are taken with consensus,” Shehbaz said while addressing a press conference alongside PDM chief Maulana Fazlur Rehman after the two met ahead of much-awaited meeting of the alliance scheduled for Saturday (today).

The PML-N president was referring to the departure of PPP and ANP from the opposition alliance.

He explained to reporters that when the consultations are completed and a decision is taken, the president of the alliance will announce the future course of action. When the reporters pressed the PML-N president about his stance on the two parties’ returns, he clarified that he does not have a ‘personal opinion’ and whatever he says is always the ‘party’s position’.

The former Punjab CM shared with the media the agenda for today’s PDM meeting. He said that meeting that will be chaired by Maulana Fazlur Rehman will discuss the country’s political situation. He said the alliance will also discuss the upcoming budget that will be presented by the PTI government next month as well as the situation in Afghanistan.

Clarifying an invitation to the PPP to the dinner held for the opposition by him, Shehbaz said that his party had invited parliamentary leaders of all opposition parties to the dinner and that the PDM had no link with it. “We had invited parliamentary heads in NA and Senate and as I am the leader of the opposition and it was my responsibility,” he said, and added that the dinner was held to discuss how the opposition could adopt a joint strategy against the government ahead of budget and expose their “massive failures in all areas” in parliament. The opposition leader also slammed the ruling party for its ‘failures’, saying they only talk about the state of Madina every day but do not implement anything.

PDM President Fazl said that the Shehbaz had arrived at his residence to inquire about his health.

The PML-N president has been focusing his efforts on bringing the PPP and the ANP back into the PDM fold to put pressure on the government once again.

Earlier this week, Fazl had said the PPP and ANP can rejoin the alliance if they apologised to the PDM for going against its decisions. The PDM chief’s comments came during his meeting with Shehbaz Sharif at the latter’s residence in Lahore on Tuesday.

Fazl, addressing a press conference after the meeting, had said both parties – PPP and ANP – had been given sufficient time to get back to the PDM leadership, but they have not done so. “There are currently no proposals to invite PPP and ANP at the PDM meeting on May 29,” he had said. However, during the meeting, the leaders will decide the future of PPP and ANP in the alliance.

On April 6, the ANP, and on April 11, the PPP had parted ways with the PDM after the latter served it a show-cause notice – as PPP had gotten Yousuf Raza Gilani appointed as the leader of the Opposition in the Senate, going against PDM’s decisions, and ANP supported it. PPP was asked to explain its move to get appointed its candidate, Gillani, as Leader of Opposition in Senate, without first obtaining the consent of parties of the Opposition alliance.

ANP, on the other hand, was issued a notice for supporting the PPP in its efforts to get Gillani designated by roping in senators from the government’s ally Balochistan Awami Party (BAP) to complete the numbers required.