* Imran Khan says with economy on recovery path, Pakistan out of the woods now 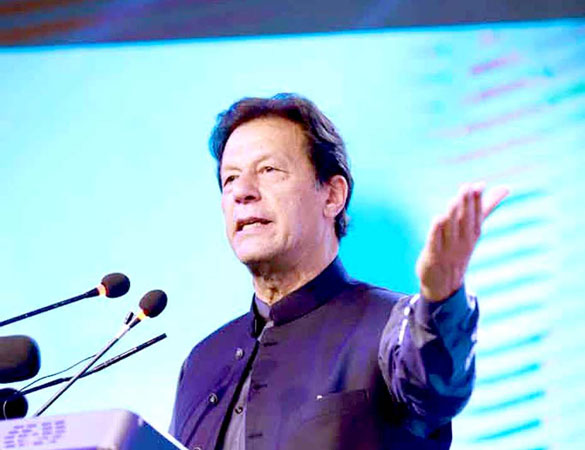 “When PTI government took over, the country was facing about 20 billion dollar current account deficit and in last eight to 10 months, the current account is in surplus due to our prudent economic policies,” the prime minister said while addressing the commercial launch of ‘Rashakai Special Economic Zone (RSEZ)’ project under CPEC. He said his government has achieved about four percent economic growth rate this year that has “unnerved our political opponents.”

The prime minister recalled the difficult time for his government when the PTI was elected to power a little over two years ago. He said Pakistan was on the brink of default, adding that the starting 1.5-year period of his prime ministership was the most challenging part of his life. He said when Pakistan was pulling itself out of the economic crisis, the coronavirus shuttered businesses around the world and had an adverse impact on various countries’ economies. “We should raise our hands and profusely thank Allah,” he said, adding that Pakistan had not suffered the same fate as other countries had, where millions were unemployed and thousands had died.

He hit out at the opposition, adding that they were ‘shocked’ to see the country’s economy improving all of a sudden. “Let me remind them [opposition] that I was the captain who introduced neutral umpires in cricket,” he said, adding that he would not give up easily in reforming the country.

Imran Khan said increase in exports is imperative for sustainable economic development and bolstering industrialization to generate employment opportunities and attract direct foreign investment (FDI). He said Pakistan is blessed with all natural resources and has potential to achieve new heights of economic progress like China by promoting export-oriented income generating industries and small and medium enterprises sectors. “We can take benefit from China’s expertise and RSEZ can provide unique opportunities to our domestic investors to learn from Chinese investors” he remarked.

He said the government would provide all necessary incentives and facilities to the investors and all the bottlenecks were being removed to attract more investors from across the globe. He said a record sale of vehicles including motorcycles, tractors and fertilizers was witnessed and sugar mills were now bound to make quick and full payments to farmers contrary to the past governments. As a result, record production of wheat, maize, sugarcane and rice was achieved this year that brought prosperity in the lives of the farmers. He urged overseas Pakistan to send their remittances through banks and invest it in special economic zones like Rashakai.

The prime minister said his government’s anti-Covid policies have been globally lauded, adding on one side his government protected nation from the fatal disease and on the other from starvation and hunger adapting smart lockdown policy. He said rights of landowners would be protected and economic zones’ lands would be providing on lease.

Chinese Ambassador Nong Rong in his address said RSEZ would help strengthen economy of both the countries and promote business activities. While appreciating the economic and investment policies of Pakistani government, he said more Chinese investment would come to Pakistan. He said confidence of foreign investors was restored due to Pakistan Government’s investment friendly policies that would bolster business, industrialization and attract foreign investment. He said Pakistan and China have time tested friendly diplomatic relations spread over 70 years which would further grow under the leadership of Prime Minister Imran Khan.