* Asad Umer says current account deficit in next fiscal year likely to stand at $2.3 billion or 0.7% of GDP
* Investment to GDP ratio for 2021-22 set at 16%
* Target of exports for upcoming year set at $26.8 billion — the highest in Pakistan’s history 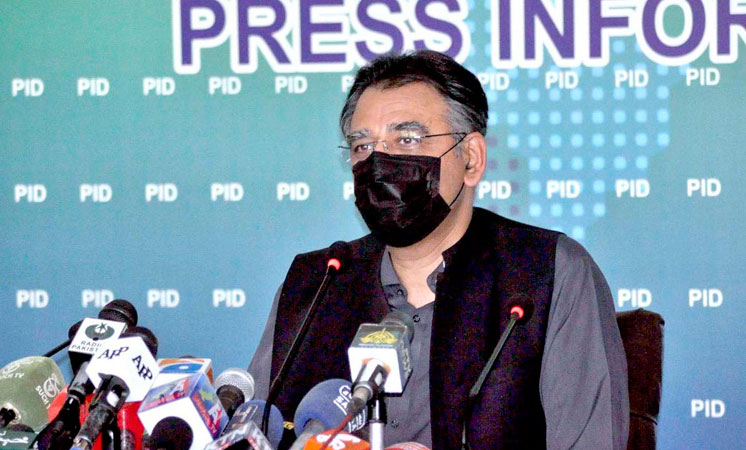 “The size of federal PSDP for next year has been increased by 40 percent from Rs 650 billion to Rs 900 billion, which will be the highest development expenditure in one year in the history of Pakistan,” Minister for Planning, Development and Special Initiatives Asad Umar told a press conference. He said the increase in PSDP would attract more investment that would help raise the GDP growth rate by 0.25%.

Asad Umar said the current year’s GDP growth rate of 3.94% was totally a productive sector-driven growth, however, during the previous government, the growth rate was consumption driven which was not a healthy sign for any economy. He said the Gross National Product (GNP), in which remittances are also included, posted a record increase of 6.5% as compared to the previous year, which was the highest in 16 years.

He said the APCC in its meeting also approved the annual plan for the upcoming fiscal year, according to which the investment to GDP ratio was set at 16% as compared to the current year’s ratio of 15.2%. Similarly, he said, the remittances, which would reach $29.1 billion by end of the current year, would increase to $31.2 billion in the next fiscal year.

As regard the agriculture sector, the minister said the cotton crop, which was hit badly during the previous season due to bad weather and other reasons, was expected to yield better result in the upcoming season. “We have set the cotton production target of 10.5 million bales in next season out of which around 4 million bales will be produced in Sindh and 6 million bales in the Punjab province,” he added.

He said during the current year, the government had ensured sufficient supply of quality seed to the farmers, whereas the international prices of cotton had also increased. Similarly, he said, electricity consumption would increase by 6% in the upcoming sector.

Asad Umar said the government has offered incentives for the industrial sector that resulted in 15% increase in consumption by the industrial sector. He pointed out that the construction sector was going to be driver of the economic growth during the fiscal year 2021-22, which would help provide maximum job opportunities to the people in urban areas. Exports, he said, were likely to reach $25.2 billion this year- the highest in 10 years. The next year target of exports had been set at $26.8 billion – the highest in Pakistan’s history,” he said. During the current year, the IT (information technology) exports posted 46% growth while in next year, the growth would gain more pace, he added.

Giving details of the federal PSDP, the minister said the government is planning to finance the development funding through innovative but effective ways, and for this a viability gap fund (VGF) was established under which the government would execute various projects under the public private partnership (PPP). He said the government had allocated around Rs 60 billion under the fund and Rs 100 billion would be spent with the help of private sector on various mega development projects such as Sialkot-Kharian Motorway, Sukkur-Hyderabad Motorway, Balkasar-Mianwali Road, Muzaffargarh-Mianwali Road, and Karachi-Quetta-Chaman Road.

He said out of total development fund, Rs 100 billion had been earmarked for water projects, while WAPDA would contribute the similar amount from its own resources. For the health sector, he said, an amount of Rs 28 billion has been earmarked while for the Higher Education Commission (HEC), the government has allocated Rs 37 billion. He said during last year of the previous government, an amount of only Rs 18.4 billion was spent on the HEC so only in three years, the amount has been doubled.

He said for skill development special programme “Kamyab Jawan Prgramme”, an amount of Rs 5 billion has been earmarked so the education sector would receive overall Rs 42 billion during next fiscal year. To a question as to whether the new finance minister and the International Monetary Fund (IMF) was taken on board before finalizing Rs 900 billion development outlay, Asad Umar said the finance minister had fully supported the PSDP outlay and obviously he must have consulted the IMF in this regard.