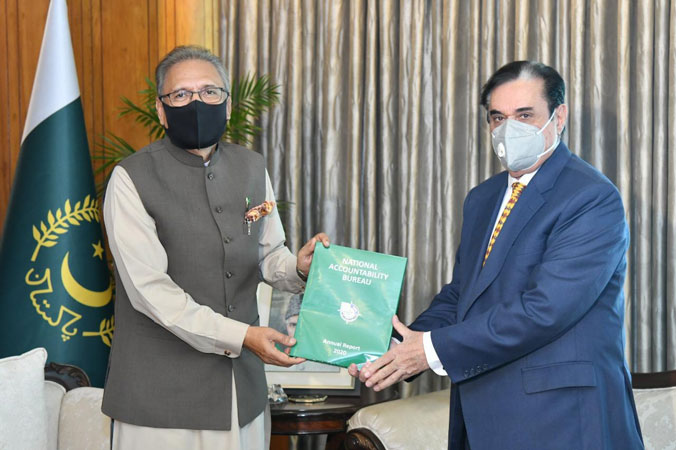 President Dr Arif Alvi on Friday termed corruption a major challenge and said it was the collective responsibility of all sections of society to discourage corrupt practices and support the government’s efforts.

In a meeting with Chairman National Accountability Bureau (NAB) Justice (Retd) Javed Iqbal here at Aiwan-e-Sadr, the president called for more effective measures to eliminate the menace of corruption from the society and promote transparency and accountability in the governance system.

The NAB chairman presented NAB’s Annual Report 2020 to the President and briefed him about his organization’s performance which had recovered Rs323.29 billion during 2020.

He said NAB received 24,706 complaints and disposed of 30,405 including the under-process complaints from the previous year.

He said NAB processed 878 complaint verifications besides conducting 369 inquiries, 175 investigations and filed 136 references before the Accountability Courts during the past year.

He said that the overall success ratio of prosecution was 66 percent during the year 2020.

Appreciating the performance of NAB, the President said that the organization had done a great job by waging a battle against corrupt elements.

He emphasized the need for further intensifying efforts to ensure across the board accountability to fulfill the vision of corruption-free Pakistan.

He assured the chairman of his full support in strengthening the organization to stamp corruption out of society.

The NAB is required to submit an Annual Report of its performance to the President under the NAB Ordinance, 1999.