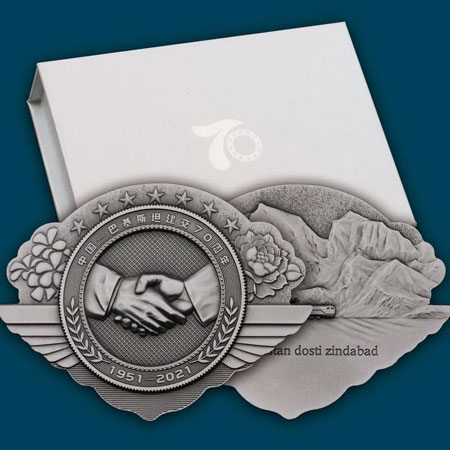 According to BICE, the medal commemorating the 70th anniversary of the establishment of China-Pakistan diplomatic ties with high collection value is very special and rare. The circumference of the badge is 60mm in diameter, and it will be issued in a limited edition of 7,000.

BICE reported: “the materials commonly used for commemorative medals are copper, brass alloy, zinc alloy, aluminum alloy, ceramics and so on. But this one is made of steel, which means the iron friendship between Pakistan and China.” Due to steel’s high hardness and irregular shape, the casting of this commemorative medal is extremely difficult. During the experiment, the casting team broke five sets of molds. It is difficult to make sophisticated medals with high-hardness material. BICE said: “However, in order to indicate the depth of our iron friendship, we still chose steel as the raw material for the medal. Thanks to its steel material, the medal is durable and does not fade or darn easily.”