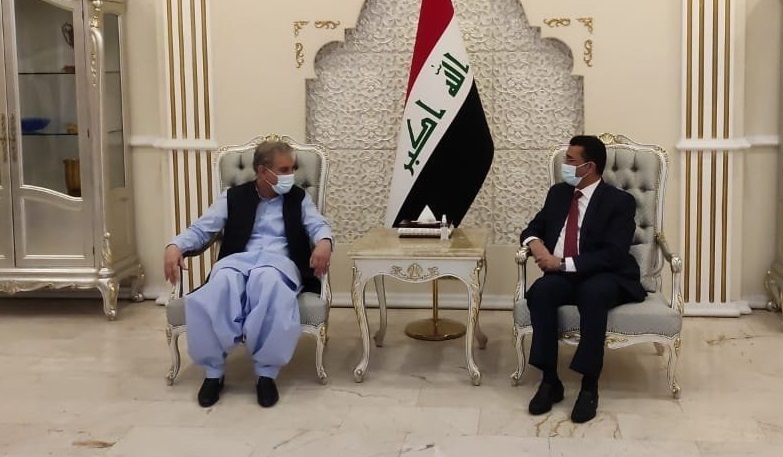 BAGHDAD/ISLAMABAD: Minister for Foreign Affairs Shah Mahmood Qureshi arrived in Baghdad, the capital of Iraq, where he will hold detailed discussions with the leadership on bilateral cooperation and on unity of Muslims.

Shah Mahmood Qureshi is on a three-day visit to Iraq on the invitation of his Iraqi counterpart Fuad Hussein, according to a statement issued by the Ministry of Foreign Affairs in Islamabad. He will review cooperation between Pakistan and Iraq in multilateral organisations, including the UN, and the Organisation of Islamic Cooperation, it said.

The foreign minister will also exchange views on problems of the Muslim world and global and regional issues of mutual interest. Qureshi will call on the leadership of Iraq and discuss bilateral matters with Iraqi ministers, especially issues pertaining to the management and wellbeing of thousands of Pakistani devotees who visit sacred sites in Iraq every year.

The foreign minister’s visit has come against the backdrop of a number of ministerial-level visits from both sides in the past few months, which signify the importance accorded by both the countries to augmenting bilateral relationship for mutual benefit, according to the statement. It said that the visit was expected to add further momentum to the positive trajectory of brotherly ties between Pakistan and Iraq.

It stated that Pakistan and Iraq had long-standing fraternal ties rooted in shared faith, values and culture and bilateral relations between the two countries benefited from shared understanding and similarity of views on a number of regional and global issues. It said that the two countries continue to collaborate closely to enhance bilateral cooperation in diverse fields.

The statement also referred to an agreement signed between Pakistan and Iraq’s Foreign Service Academies in April this year as an example of growing cooperation between the two countries. Prior to that, President Dr Arif Alvi had offered training courses for the Iraqi military personnel in the defence training institutes of Pakistan.