Amir should be part of team’s WC plans: Wasim Akram 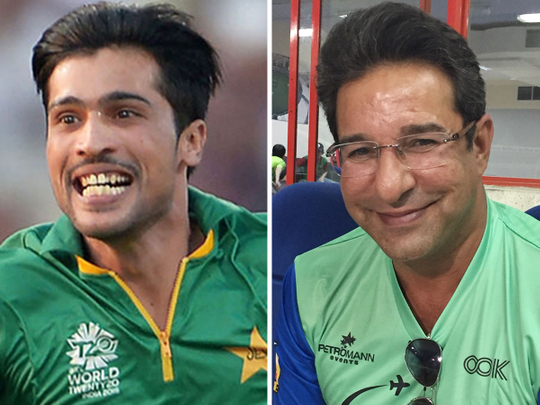 ISLAMABAD: Former Pakistani Skipper Wasim Akram believes that pacer Mohammad Amir should be a part of the team’s World Cup plans, saying being a senior, he can guide the young bowlers.
The 54-year-old said that bowlers bowl in packs, and it was important to have a senior bowler to guide the youngsters.
“I still think he should have a place in the Pakistan side. We have three white-ball World Cups in the coming years. I have been saying for a long time that bowlers come in packs. When you have a senior bowler in the pack, he can guide the young bowlers in pressure situations by talking with them.
They can have quite an impact by giving them confidence and providing them with options. When I had a senior bowler guiding me as a young bowler, I had Imran bhai, and I would ask him before every ball. It gives you that added confidence when a senior bowler tells you to do something. I think that is also why Amir is so important,” cricketpakistan.com.pk quoted him as saying.
The former legendary pacer questioned why people had a problem with Amir’s Test retirement, which was a decision that a player makes for himself.
“Amir should ask himself what his plans are for the future. He should ask himself what his personal goals are. He can get any league in the world. He is still one of the top bowlers in world T20 cricket. He has a ton of experience, and he is still young. If he retired from Test cricket, by the way, it was his problem. It was his decision. Why are we going against someone because he retired? A player knows about his own body, especially a bowler. Test cricket is not easy.
If you haven’t played first-class cricket for five years, then your muscles aren’t used to bowling for that long. Amir should just play his cricket. There is no point to all of this. He said what he had to say and explained his point of view. Now he should just play cricket and enjoy his family life as well,” he said.
Akram further stressed the need for Pakistan to finalise their batting unit ahead of the major upcoming fixtures and praised wicketkeeper-batsman Mohammad Rizwan.
“My mindset is a little different. I believe that batsmen that are used to a position (opening) and have been playing at that position from the start as kids, playing them on a lower number is hard. I came across a Sohaib Maqsood interview the other day. He also said that it is hard for top-order batsmen to play down the order. You don’t get a sense of the situation and need to score 20 runs off eight balls. These guys can’t hit from the first ball,” he said.
“Rizwan was a captain in a domestic T20 side. He started as an opener and performed well for Pakistan as well. But your batting order has been completely shuffled. Your opener is coming in at number three, the number three player is coming in at five, so the combination has been scrambled. This is why we are getting stuck on 140 to 150 runs. There is no consistency. We have some big matches coming up. There is a big series against England on the horizon. We should have had a stable top-six batting lineup until now. We still don’t know who the top six are in Pakistan’s T20 lineup. We know four but not six,” he said.