* After Vegas falls to flesh-eating monsters, hulking but surprisingly sensitive action star Dave Bautista leads a squad of mercs tasked with fighting their way along the strip 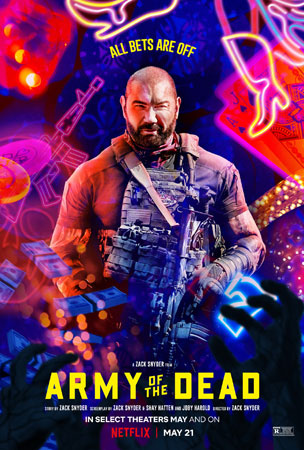 Bet on it. Army of the Dead is streaming now on Netflix, and the lengthy splatterfest is every bit as subtle as it sounds.

After Vegas falls to flesh-eating monsters, hulking but surprisingly sensitive action star Dave Bautista leads a squad of mercs tasked with fighting their way along the strip and into a casino. They’re looking to win big by busting open a vault and escaping in a helicopter. Sounds simple, right? Except the locals have swapped slot machines in favour of chomping human flesh. What happens in Vegas stays in Vegas, but it doesn’t stay dead.

Our heroes are a multiracial, multiskilled motley crew of tough nuts, in the style of ’80s combat crews from Predator or Aliens. There’s even a sketchy tag-along corporate spook. OK, so this is the kind of flick where characters are introduced by the type of weapon they use to explode zombies into gory chunks, but the film actually puts a bit of effort into making them real and relatable.

The charm of the cast has to do a lot of heavy lifting. Omari Hardwick and Ana de la Reguera provide the amiable muscle, while the squad is rounded out by a zombie-blasting YouTuber, a Kohl-eyed icy blonde and a nervous safecracker. Hilarious Matthias Schweighöfer steals every scene playing the kooky kid with the knowledge to open the vault, although he’s given a run for his money by Tig Notaro’s stogie-chomping chopper pilot. And following films like Blade Runner 2049, man-mountain Dave Bautista once again delivers a winningly vulnerable turn as the conflicted veteran.

Snyder selects the musical soundtrack with his usual subtlety, which means as well as Elvis’ Vegas-themed classics we’re treated to Bad Moon Rising, The End and a climactic tune that’s either fiendishly ironic or just plain boneheaded. That’s the thing with Army of the Dead: It has a lot of fun nodding to other films, but there comes a point when you wonder if it’s homaging Aliens or just ham-fistedly grabbing scenes from James Cameron’s 1986 war/monster classic and just yeeting them in at random. Aliens, for example, builds to a scene of noble sacrifice that feels heartbreaking and truly earned; Army of the Dead takes that scene and tosses it in at a point where it barely registers.

A couple of characters’ conversations clue you in that Snyder is having fun with the action genre, including a scene involving earlier missions that borders on the surreal. But you still never know what’s homage and what’s a simple lack of inspiration.

Because it’s a zombie story there are also hints of a darkly ironic subtext. Snyder’s previous zombie movie was his breakthrough film, the 2004 remake of Dawn of the Dead written by James Gunn, which offered a sly capitalist critique of mindless hordes shambling around shopping malls. Here the symbolism involves rotting husks of people shambling across casino carpets and a zombie leader standing atop the Statue of Liberty — but not the real one, the fake one. The stricken city is a microcosm of the American dream, a land of opportunity with untold riches at stake if you’re prepared to bet your life. But the game is rigged against you by high-ranking politicos and bullying guards who hold the power of life and death over their fellow man.

Anyway, who cares — you don’t go to Vegas for culture. You go to have a blast. And you watch Army of the Dead to see Dave Bautista unloading on a casino full of zombies. That’s when the undead action comes alive, with nifty stunts and audacious camerawork.

In between, however, there are a surprising number of lulls in pace. It takes over an hour to even get into the city, and even then when you expect a balls-to-the-wall slaughter-fest there’s time for father-daughter heart-to-hearts and general ambling around. For a city infested with roamers, the squad are surprisingly free to roam. Looking at the running time, you’ve got to ask: Is there any need for a film about mercenaries fighting zombies in Las Vegas to be two and half hours long? 100% no. But considering Snyder’s last film was four hours long, we should probably be thankful.

Still, everything is too long these days. Army of the Dead doesn’t win ’em all but the action scenes and fun Vegas setting provide a few aces up its sleeve.