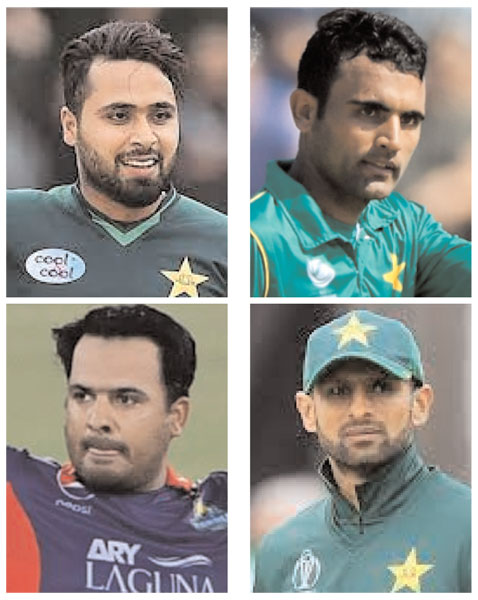 LAHORE: It’s all to play for as the Pakistan Super League 6 moves to Abu Dhabi with the remaining 20 matches of the season to be staged at the Sheikh Zayed Stadium from the first week of June. Defending champions Karachi Kings, 2017 champions Peshawar Zalmi, 2016 and 2018 champions Islamabad United and last year’s runner-up Lahore Qalandars are all locked at six points after an engrossing 14-match Karachi-leg (February 20-March 3). While the teams have tweaked their foreign players’ rosters for the Abu Dhabi-leg due to availability issues, the core of the teams formed by seasoned Pakistan T20 exponents, remains the same. Almost all of Pakistan’s leading T20 exponents will be seen in action in Abu Dhabi with their focus on getting their sides through to the playoffs before a shot at the glittering PSL 6 trophy. In the Karachi-leg Faheem Ashraf – Islamabad United, Fakhar Zaman – Lahore Qalandars, Mohammad Nawaz – Quetta Gladiators, Sharjeel Khan –Karachi Kings, Shoaib Malik –Peshawar Zalmi and Sohaib Maqsood –Multan Sultans made significant contributions for their sides, all six hope to make their presence felt in Abu Dhabi too.

Faheem Ashraf of Islamabad United said: “I enjoyed the Karachi-leg as I made contributions both with bat and ball for my team. I know that I have an important role to play for United and I remain focused on delivering to the best of my ability in Abu Dhabi. “The weather will be challenging in terms of the heat and humidity so fitness would play a key role for all the six teams, we will prepare hard in the lead-up to our matches and aim to hit the ground running. My personal aim would be to keep making winning contributions for my side both with bat and ball.”

Fakhar Zaman of Lahore Qalandars said: “I have been pleased with my batting form both for Qalandars and Pakistan in recent months. The Karachi-leg turned out well for us as despite a low net run-rate we are joint equal on points with the table toppers. “We have gained considerable experience of UAE pitches over the years, the conditions in Abu Dhabi would mostly be batting friendly, the pitches though offer something to the fast bowlers also which makes it a good contest. The weather will be challenging but that will spur us on further. My aim would be to continue to provide good starts to the team and play out long innings for my side whenever an opportunity comes.”

Mohammad Nawaz of Quetta Gladiators said: “The Karachi-leg was a tough one for us but the victory in our last match there gave us a lot of confidence. We are a team known for our comebacks and fight backs and we head to Abu Dhabi with our spirits high. At a personal level, I am keen to make match winning contributions both with bat and ball. The Karachi-leg was decent for me in terms of my batting performances while finishing a couple of games for Pakistan in recent T20Is has renewed my belief in my abilities. I have always enjoyed bowling in the UAE and I am preparing myself for making a substantial impact with the ball on pitches which can be conducive to spin bowling.”

Sharjeel Khan of Karachi Kings: “The Karachi-leg gave me a lot of confidence as I was able to perform for my team and post the first century of the HBL Pakistan Super League 6. My aim has always been to provide a flying start to the team and play my natural game. Having Babar Azam at the other end brings a lot of comfort and joy. Being the defending champions and table toppers in the current edition, we head to Abu Dhabi with a great deal of confidence. However, Abu Dhabi conditions would not be that easy especially with the heat, my target would be to attack from the outset and make significant contributions for my team. I have a firm belief that we have the capability of defending our title.”

Shoaib Malik of Peshawar Zalmi said: “As a seasoned campaigner, my job is to use my experience to the benefit of my team and play the finisher’s role with the bat in tough situations. I am pleased with my batting form and fitness standards that I was able to put on show during the Karachi-leg. We bonded well as a team which helped us to our second position on the points table. In Abu Dhabi, the heat would be a big challenge for all the teams and the ones who cope the best with the conditions will be best placed to lift the trophy. As always, I would aim to deliver to the best of my ability and take the team through tough situations while offering my full support to the captain and team management. I have worked extremely hard on my batting and fitness in recent months which should hopefully help me a great deal at the business end of the tournament.”